Previous reports of Jenny’s crash on ice & memory of attempting to wring & then dry out soaked clothes by the log fire in the pub for this ride, didn’t deter us as forecast temperatures were 10C & no rain. In spite of misty moments on the train there was a fair amount of sunshine & still loads of autumn colour in the trees & hedgerows & even hollyhocks blooming in the station & nearby. 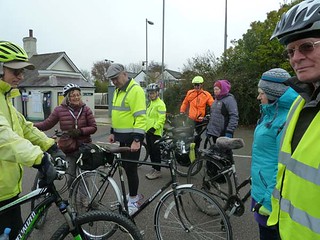 Four of us, Anne, Sue, Marilyn & Roger, caught the 10.20 train & waved  to Chris at Lewes station as he jumped in to join us. Mick had  started out an hour earlier from home in sunshine to Berwick by the NCN 2. He wasn’t at Berwick Station when we arrived, but Julian, Ian & Angela were, having driven & Jenny had cycled from Lewes. Rob soon arrived after cycling from his home in Heathfield but we had to wait a few minutes for Mick, who had been scoffing cake & coffee in Alfriston, which he described to make us jealous, having misremembered the train’s arrival time. Ian phoned the pub & told them we were 11 & would arrive at 12pm. 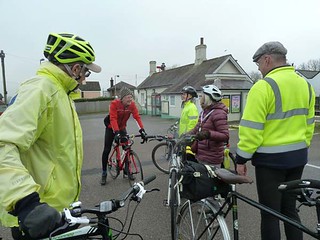 The group then split in half as 5 or 6 cycled off to the public toilets at the Arlington Reservoir Nature Reserve. Mick led off the rest of us & cycled right past the toilets etc & on to the first turning. I rounded up the advanced party & admired the trees in the picnic area. With Ian leading & Rob as backstop,we kept a good pace up to the pub to keep ourselves warm & to reach the pub in good time for quicker service, partly as Mick & I had a 90th b’day party of a neighbour to return to at 3pm.

There was a good choice of grub at the pub & a large table  set for us in the conservatory, where we watched the sky turn blue, enough to make a sailor’s shirt & discussed the derivation of “hoist by your own petard”; Jenny pointed out that a petard is not a flag.

Angela told us all about her recent trip to Copenhagen which could be a recce for our next year’s Clarion Summer or Spring Outing. She didn’t do much cycling but had the use of 2 bikes at the Air B&B pad they rented & admired the bike tracks & heirarchy of pedestrians, cyclists then lastly motorists, who knew their place. Soon the roast porks, moussakas, broccoli soups & fishcakes arrived & all proved delicious, copious & good value. Sue & I had to help Mick & Marilyn to clear their plates as the roasts were such big platefulls.

Again we split into 2 parts; a fast four for the early [1.48pm] train, Chris & Jenny soon cycled off to Lewes & Rob to Heathfield, the remaining 3 followed with Ian, apart from Marilyn who tried to catch up with Sue & Roger, Mick & Anne, who were in a hurry to catch the train. Unfortunately, although our train was 3 or 4 minutes late, the automatic barrier came down 4 minutes early & she was stuck on the wrong side of it. Julian informed me that the Berwick Inn proved to be closed so there was no coffee & cake or warm shelter to sit out the hour till the next train. Our kind leader, Ian, stayed with her until the train finally arrived.  The automatic barriers are really frustrating & Sue was truly sorry that Marilyn hadn’t managed to make it in time.

It did happen to some of us on the last ride at Polegate too, but we only had to wait half an hour & that left time to explore the side of Polegate which we rarely see: ie South of the Cuckoo Trail. Perhaps they should have cycled the 2 miles into Alfriston & sampled the teashop Mick had praised for his morning coffee stop.

Thanks to Ian for organising & leading a super ride we all enjoyed & were grateful for the clement weather, lack of hills, but still great views of Downs, parklands, woods & passing horse riders & ponies & fields [2] of PV arrays on the Solar Farm in Langtrye Lane. Roads were peaceful enough for us to chat as we cycled & discussed local left politics & perspectives, with other cyclists outnumbering cars, apart from 1 or 2 mad motorists racing past at 70+mph. 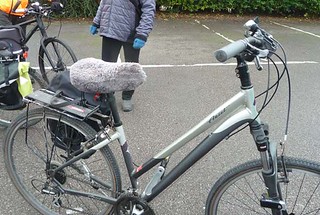 Jenny seemed to be the only person with a camera & she’s not keen on group shots, so not sure that there will be many Flickr pics but hope so.  Eleven jolly cyclists did at least 12 miles, at average speed of almost 8mph & made the most of the sparse sunshine around in November, thanks to the Clarion Cycling Club.

This entry was posted on Tuesday, December 2nd, 2014 at 11:59 am and is filed under Ride report. You can follow any responses to this entry through the RSS 2.0 feed. You can leave a response, or trackback from your own site.