What a great idea of Angela’s to have our Christmas lunch at Stanmer House. On Saturday. Everything went off excellently and (as the late Ronnie Scott used to say) if you enjoyed it half as much as I did – then I enjoyed it twice as much as you did.  Sitting there, I couldn’t help thinking that when three of us started the club back in 2004 we would have been quite surprised (and delighted) that with more than half of our membership not able to make it we still had a dozen or more of us around the table.  Well done, Angela and thanks! Merry Christmas and Happy New Year! 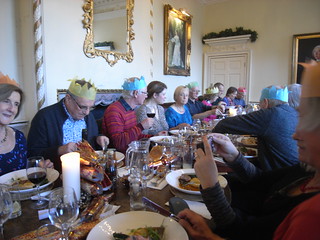 Apart from the “Brunch Ride” on 2 January we haven’t any at the moment. I’ve delayed this newsletter for a couple of days in the hope that a last minute volunteer would materialise – but as yet none has, though I’m aware that some people are thinking about it.  So what we need ASAP is a ride for 11 January – and then lots of offers for dates in January, February and March (for a start!)  In the absence of a “real” next ride I’ve put the details of the 2 Jan Brunch Ride under that heading below.

I gave notice of the meeting in the last edition  It will be at 8 pm on Thursday 8 January at 104 Bonchurch Road.   I will be putting our the agenda before the end of the year. I realise that, as ever, there will be some who can’t make it.  But if you have something you would like on the agenda please let me know ASAP.

One decision that will have to be made concerns whether or not to suspend our local membership for 2015.  If you have a view on this I will be happy to circulate a reasonably short argument with the agenda – whether or not you can make the AGM.

I’ve had an email from a volunteer at a youth centre near Albany, the state capital of New York.  Recently, they’ve been discussing bike safety and the importance of protecting your head and two of the kids, Patricia and Elizabeth, have done some internet searching at home and found a website about helmets and head injuries. They thought we might be interested in having a look at it – as we might.  Most of us do use helmets when cycling but there’s still some controversy around the subject.

So thanks – and seasonal greetings from all of us – to everyone at the youth centre and special thanks to Elizabeth and Patricia.  Take care when riding your bikes and keep up the good work!

This entry was posted on Wednesday, December 17th, 2014 at 12:29 pm and is filed under News. You can follow any responses to this entry through the RSS 2.0 feed. You can leave a response, or trackback from your own site.