We propose to revisit Woods Mill Nature Reserve & compare 2013 with 2015, hoping this time to see more birds & not to lose my pannier. We ate at The Royal Oak in 2013 to general satisfaction & David wrote an excellent report. I will try to take a small picnic & flask of hot tea for the Nature Reserve & we can have a walk & a little picnic for elevenses – weather permitting.  We shall try & do a recce & check out the pub but the train times are;

Possible elevenses at Woods Mill; bring your own favourite tipple.
Lunch at The Royal Oak at Poynings, at 12.30.  It won’t be Mothers’ Day then as it was in 2013, but we will still need to book. It would be useful if you let us know if you intend to come so that we can tell the pub.
Possible tea-stop at Washbrook Farm on the way back to Hassocks Station.

The last ride: Sunday 22 February 2015 – Shoreham to Partridge Green and back 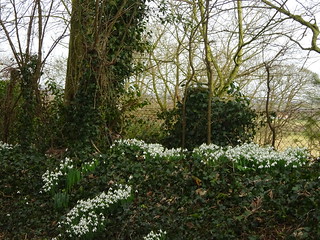 The day started with lovely sunshine as Mick, Ann, Delia, Julian and I met at Shoreham station. It seemed that all of us were aware that the weather forecast for mid-afternoon was not good at all, with both rain and very high winds coming in.  With that in mind, we set off very promptly and agreed not to stop too often in order, hopefully, to make it back before three-ish and avoid a soaking. 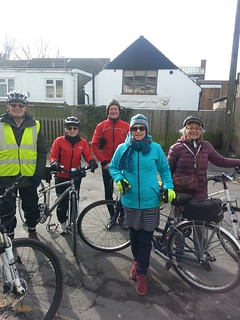 So, off we went through Shoreham, crossed the A27 and proceeded up Coombes Rd towards Annington. I think that some of us had a little bit of difficulty with the ‘not stopping’ agreement and in fact did not abide too strictly by it. How can you not want to stop and stare at a field blanketed with snow drops? And, looking across the fields and river to the right of Coombes Rd, looms the old cement works which I personally think should be blown up, but Ann pointed out that there are a number of houses nearby, so it’s probably not a good idea. 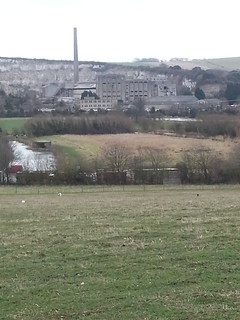 We were then cycling towards Botolphs and Steyning and despite some road noise from the by-pass, the bird song was delightful. Having Julian with us meant that some of the bird song was identified as rooks, a green woodpecker and a great tit, which Julian said sounded like a tyre being pumped up! 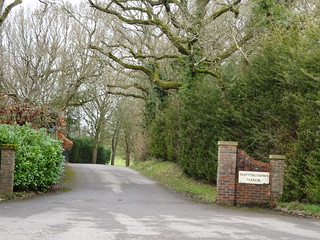 As usual on our rides you see some amazing cottages and houses. Just before Ashurst, Mick and Delia had stopped by a place called Wappingthorne Manor so that the rest of us could catch up. One expects a manor to be a fairly wapping great big house, so we thought it was very aptly named! We also passed Wappingthorne Farm and we noticed that there were not just large silos pointing towards the sky, but two castle-like towers which look very old, possibly from Norman times, and seem very out of place. 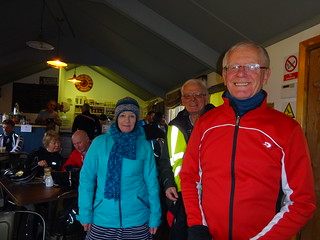 From here we were not too far from Partridge Green and our lunch time destination at Stan’s Bike Shed. The Shed is absolutely lovely. It isn’t very big, perhaps accommodating 20 people or so around tables with an outside seating area for when the weather is warmer. Between us, we had an assortment of soup and ciabattas and all agreed that the quality of the food was extremely good. The Shed also serves really lovely coffee and has a great choice of different teas. There were quite a number of cyclists having lunch alongside us and we got chatting to a couple from Horsham who had cycled along part of the Downslink. Their clothing looked a lot muddier than ours and they told us that the route was quite challenging, so we decided that we would not take the Downslink route back as planned, but just go back the way we had come. 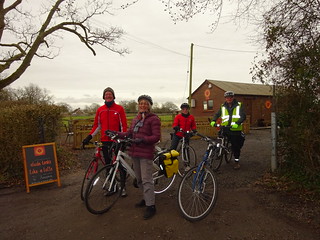 So off we went, and by now the weather was changing and we were cycling into the wind. Mick and Delia cycled ahead and as we got closer to Shoreham, Julian suggested that he, Ann and I veer off to the Downslink and take pot luck that it would not be too muddy and be able to get off the road for a bit. It turned out that it was it was fine and more sheltered from the wind. The river, which runs alongside the trail, was incredibly choppy and it was now spitting with rain, so we ploughed on but did take time to stop to look at the wonderful wooden sculpture of the heron. 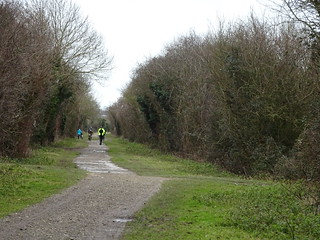 As we approached Shoreham the rain began to get heavier and we were all very relieved that we did not have much further to go. Ann and Julian said they would like to go for tea somewhere in the town and to meet up with Mick and Delia. Unfortunately, I needed to get back home so I said my goodbyes and left them to link up with the others. 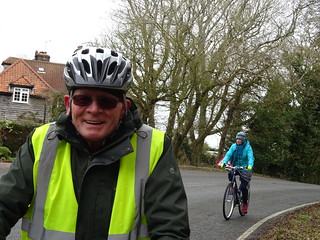 Thank you so much to Ann and Mick for planning the ride as it was a very lovely day out, and good luck to Mick on his future night-ride from London to Brighton, or is it Brighton to London – sadly I don’t think I will ever have the stamina for a ride like that!

Well, thanks to Anne and Mick agreeing to lead two successive rides and Jim taking on 22 March we are now OK until 5 April. So let’s have an offer for that date – and for 19 April and 3 May too. Please don’t leave it to the “usual suspects” again.

Could do with some material for the newsletter too!

The Origins of the Clarion Cycling Club and cycling in the 1890s: 177. Thoughts on “cycling and the public”

We take the Coombes Road to Steyning, rather than the Downslink, then the B2135 up to Stan’s Bike Shack at Partridge Green, where there will be hot soup & delicious sandwiches, super hot choc & coffees, cakes but no ale.

Return via Wiston & [hopefully ] Mouse Lane. It is the latter Lane we investigated today but were told by the estate office at Wiston House that we cannot cycle that way. After lunch I investigated the Downslink & it looked idyllic to me , so we will recce that on Sunday when Mick swaps his road bike for the Ridgeback. For the ride I would hope to lead the willing down the Downslink & Mick would lead the roadsters back via Spithandle Lane.

Opportunity for tea stop at Wiston [bit soon after lunch according to Mick], Shoreham Airport or Steyning. Mick prefers Shoreham Airport for tea & the meeting up of the 2 groups, if there are 2 groups. Downslink off-roaders could continue down to Shoreham if desired & possible weatherwise.
Trains back: from Shoreham more frequent 16.03, 16.20, 16.38, 16,49, 17.07.

Terrain;  all roads though off-road option, maybe short section on fairly busy A238, though I hope to avoid that. Stan [Steve?] says Partridge Green section of Downslink is best bit. We’ll check it out. Somewhat undulating, but nothing steep.

Distance 11 miles before lunch, then maybe 13 after lunch.
http://stansbikeshack.coffee/about-us/

Well,  no one offered a ride for last Sunday – perhaps not surprising in the light of the weather forecast.

But thanks to Anne and Mick we do have one for s 22 February.

Now we are looking for volunteers to lead the March (and April rides) most urgently for 8 March.  Any offers?

I have said that I can’t back stop at the moment.  There are – as always – dates I couldn’t make anyway but there is a more general reason.  Sometime during the next weeks – or months – I will be called in for cataract surgery and I don’t want to put myself down to lead a ride and then have to back out – possibly at the last minute.

Anne, Mick and Fred have let me know they will be representing us in Llangollen.  Is anyone else going?   Do let me know if you are.

In her report in the last newsletter, Sally mentioned “the bronze life-sized statues of Edwardian medical philanthropist Dr. Salter, his wife, their daughter Joyce who died in infancy, and, on the parapet, her cat.” This was  Dr Alfred Salter (1873- 1945) .  His career, political as well as medical and philanthropic, was a very significant one as was  that of his wife Ada,

The statues Sally and the others saw have only been there since last November and were the outcome of a local campaign that raised about £60,000  It replaced a statue of  Salter sitting on a park bench  which was stolen in November 2011 from Cherry Garden Pier.  Simon Hughes, the  Liberal-Democrat M P for Bermondsey, expressed outrage on his blog of 21 November 2011 and described Salter as “ the greatest of our MPs in the last century”.  I’m sure he was right.

A lifelong pacifist, Slater joined the Independent Labour Party (ILP) in 1908  was elected as MP for Bermondsey in the 1920s, was one of the few Labour MPs to survive the election debacle of 1931. He continued until he stood down at the 1945 election. He died a few weeks later. In 1949 Fenner Brockway’s biography of Slater – Bermondsey Story – was published.

I first came across Salter in more than a general way when I was researching my book  Romancing the Revolution.  The ILP, along with most of the British Left were, initially, carried away by the hopes raised in the midst of an awful war by the revolution in Russia.  I discovered that Salter was the first person in the ILPs paper, Labour Leader to express fundamental  criticisms of the Bolsheviks, while praising them for “their unflinching courage.”   Their movement had other virtues but, he wrote, “we must definitely dissociate ourselves from its violence, its suppression of opposing criticism and its disregard for democracy.”  This was in March 1918  “Socialism apart from true democracy,” Salter concluded,  “is not only meaningless but valueless.”

More recently, in my – as yet unpublished – book on the interwar ILP – I mention that in 1923 Salter was an advocate of the “Living Wage.”  Three years later the ILP adopted the famous report with this title.  The ILP was at the centre of Salter’s life, but he parted company with it when it disaffiliated from the Labour Party in 1932.  The previous year he predicted – sadly, accurately enough – that a disaffiliated ILP, now under the leadership of the iconic Jimmy Maxton, would degenerate into “a mere nuisance and irritant, like the Communist Party.”

Among other internet sources for more info on Salter there is Graham Taylor’s “Alfred Salter and the Bermondsey Revolution” on the ILP (now Independent Labour Publications) website.

In case there is anyone who still hasn’t renewed their membership for 2015  – and since I wrote this Julian has told me that there are still lots who haven’t – can I remind you that the subscription fee is £8?  Send your cheque to Julian Arkell, Treasurer, 17 Normandy House, 18 The Drive, Hove, BN3 3JB.

Alternatively you can pay by BACS but if you do it is vital lhat you let Julian know that you have done so.  The details are

Reference:  [your own surname]

Email Julian at  arkell@arkell.info to confirm

The Origins of the Clarion Cycling Club and cycling in the 1890s: 176. Clarion suit

Having decided it was time to move on from 1896, I was trawling through the 1897 March numbers when I found something I thought might be interesting – given that from time to time it’s suggested that we might – like most Clarion sections – go in for our own club jersey. I don’t suppose anyone had in mind a “Clarion Suit” complete with “Clarion stockings.” As for “purple knickers”…!