The Next Ride: Sunday 28th June 2015 Brighton to Newhaven by coastal route.

This route to Newhaven literally hugs the coast. We do not set foot on the A259.

Cycle path to the Marina where we join the Undercliff to Saltdean. A short steep climb to a rejoin the clifftop. A stretch of cycle path alongside the A259 before we head closer to the coast taking the concrete and slightly off-road paths beside the bungalows of Peacehaven before we dip down to another stretch of Undercliff.

A stiffish but short climb up to rejoin the track that meanders its way through the bungalows and concrete roads of Peacehaven to the Headland. Here we join the Sustrans route N2 into Newhaven. Off-road with large but manageable puddles if it has been raining, we turn right to swoop down through the suburbs of Newhaven to our lunch stop the Hope Inn.

After lunch we return to Brighton inland via Piddinghoe and the suburbs of Peacehaven, regaining the Undercliff path at Saltdean.

Those daunted by the steep (but short) climb out of Piddinghoe onto the downs above Peacehaven can always take the train back to Brighton from Newhaven.

The last ride: Sunday 14 June – “Pier to Pier” (Brighton to Worthing and back)

A small but intrepid group gathered outside the Palace Pier for Sunday’s ride to Worthing Pier and back: Amanda, our Captain for the day, David, Chris, Fred, Mick and Anne, plus Simon from Suffolk, from our Cuba trip last year, on a hired Brompton. But Mick and Anne had only come to see us off! (The rumour was that they were to attend the Naked Bike Ride later in the day!) As we set off, we were joined by Corinne, so that made six. 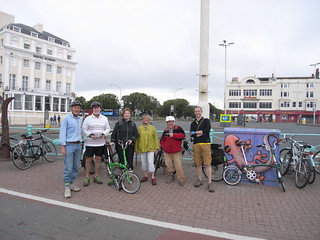 The weather was overcast with a slight chill in the air, ideal for cycling. We dodged tourists on the seafront cycle path, passed the i360 sections waiting to be erected by the West Pier and soon we were in Hove and then Shoreham harbour. We crossed the lock gates and followed the blue NCN signs through Southwick into Shoreham, through an Italian market by the church and over the new footbridge to Shoreham Beach. 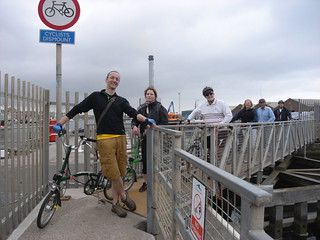 We stopped at Widewater Lagoon briefly and spotted a kestrel and little egret along with swans and biplanes heading for the airport. There was a dingy race going on out at sea at Lancing and the pier was now in sight – and it was cycle lanes all the way. At the pier we were greeted by the Salvation Army band! We were early at the Denton, so managed to grab a couple of tables for lunch, mainly of club sandwiches and gastro-chips. I was disappointed to find they had no Harvey’s on tap, but the soup was excellent. 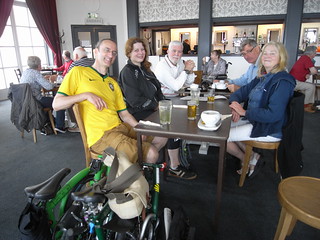 After lunch I stayed on in Worthing and Shoreham to visit some Open Houses in the Worthing and Adur Art Trails and made my own way back on the electric later. 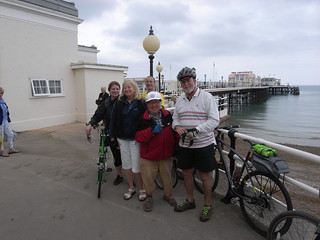 After Fred’s departure for the Worthing Open Houses, our return journey was skilfully navigated for us by Dave and Chris who were familiar with the route and we departed the route to leave for home one by one until finally only Chris was left to complete the last five miles to north Brighton.

Many thanks to our de facto leaders – Fred, Dave and Chris and to everyone who came along for some Clarion fun and fellowship.

Leon adds: Joyce and Leon attended again this year’s Naked Bike Ride, its Tenth year in Brighton. There were approx. 1000 riders. Pity we didn’t see any Clarion members on the ride or even on the side of the route.

Things to think about

If you’re a CTC member you’ll know about its current campaigns from Cycle Clips… but if you are not I recommend having a look at its website from time to time.

One thing that the Club is concerned with – I think rightly – is the fall in the number of traffic police and therefore the probable increased risks to all road users.

The current (11 June) edition of Cycling Weekly has an interesting piece about tubeless tyres. At the moment they seem to be mainly used by in competitive mountain biking. They are similar to car tyres and because there is no inner tube are much less likely to puncture. But don’t rush out to buy them.  The problem is as CW concludes that they are “such hard work in the event of total failure.”  They sound almost impossible to get off.  But this problem may be temporary so it would be worth keeping an eye on developments.

The Origins of the Clarion Cycling Club and cycling in the 1890s: 182. Second part of Armley Clarion report

In the early years of the Clarion Cycling Clubs there reports were often quite long, This one which is the second part of the one I included last time – I thought it was too long to put in the whole thing is one of the longest.  As the number of clubs multiplied with them all wanting to see their reports in the paper they became much shorter – by 1914 almost like telegrams!

If you want to check why a resolution of such barbarous ferocity was passed on poor H Hardcastle have a look at the previous newsletter though there are not many clues there!

The Next Ride: Sunday 14 June – “Pier to Pier” (Brighton to Worthing and back)

We will follow the  NCN 2 route  along the sea front from Brighton pier to Worthing pier, just 24 miles there and back – and totally flat.

Lunch at the restaurant on the pier around 12.30.

No afternoon tea stop proposed unless someone wants to stop at Carats; if they do, I will rely on the tea stoppers to find their own way back to Brighton to allow me back to London at a reasonable time.

It will be a longish ride for some; option for train assist on one half of the ride.

Amanda to the rescue – yet again!

Hers was the only response I received to my “final call” appealing for someone to take on Leon’s suggestion for a “Pier to Pier” ride on 14 June.

Julian had to cancel yesterday’s ride.  You can never be sure that you are not going to get some rain when you venture out on the bike. But there’s a big difference between being caught in a shower and setting out on a day when the forecast tells you that you are going to be soaked for the next four hours or so.  Not a lot of fun.

The ride will not be wasted. It will be “recycled,” If you will pardon the quibble, in August. We now have, as you will see from the list below some definite possibilities for future rides and Jim is also planning something. But we still need more! It would be nice to have an offer for 26 July.

Weren’t they a busy lot!