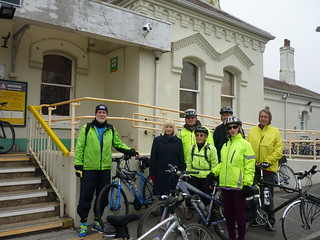 David had long wanted to create a safe ride from Shoreham Beach along the coast to Littlehampton avoiding the busy A259, railway crossings, roundabouts and traffic lights, since the days when Linda used to cycle with us.  Now she travels as far as Venice, but did today join the ride at Widewater.  The pre-start photo at Shoreham-by-the-Sea Station south-side thus did not include her.  David’s camera was wielded by a kindly van driver to record Angela, Chris, David, Delia, Julian, Richard and Sikka.  Julian and Sikka had come by train, Angela and Delia had brought their cycles by car, Chris and David had cycled there.  At 10.30 we set off passing St Mary de Haura Church and crossed over the new Adur steel swing-bridge and then west on the Shoreham beach road to Widewater still in the mist with little to see apart from two Little Egrets and a few Swans. 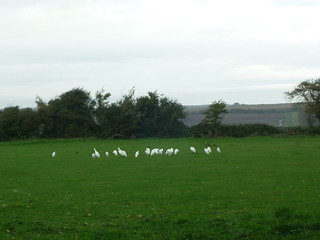 Here are the egrets David saw on the recce

No sign of the usual Little Grebes, or Cormorants hanging out their wings to dry. 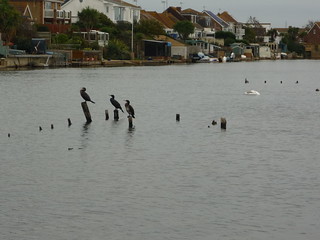 But here are some cormorants David saw on the recce

After passing the Lancing Sailing Club and the Green we carefully cycled past the doors of the newly-opened Perch Café on the beach, from which the wafts of cooking spoke of an early lunch: and Chris said his wife had found it a good buy.  The coastal path followed to Worthing Pier and on to the end of the promenade and after passing a newly sown field with gulls resting and a flock of dunlins busily pecking away, we turned briefly inland to the end of Marine Drive into Ferring and a strong-coffee stop at the Bluebird Café.  Then the able men lifted the cycles up onto the beach and soon after over a five-barred gate as well.  We cycled carefully through quiet, private roads of the rich and famous, eventually, as David put it, to be disgorged into Sea Lane and the beach in Rustington.  A short ride along the promenade of the newly-developed harbour in Littlehampton, got us to the Harbour Lights café in the Look and Sea building by 12.50, after about 13 miles.  Delia and Linda sat outside and the other six had a reserved table against a mirror wall.  The meals were scoffed down with coffee, beer and lemonade, which included soup, fish pie, jacket potatoes with tuna and baked salmon.  Just outside a loving mother Swan was caring for her two handsome large cygnets with their perfectly clean feathers. 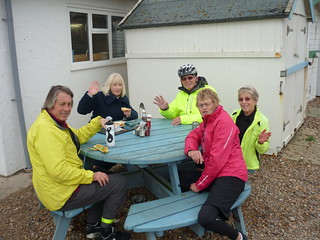 The return journey was blessed at 2.50 pm with sunlight and a blue sky until we reached the Sea Lane Café where Delia, Linda and Sikka decided to continue on.  It soon got cold and misty and after coffee, hot chocolate and apple crumble and a concerned discussion about the lack of jobs for school leavers, Angela, Chris, David and Julian slogged their way back past Widewater where three Little Grebes were diving, but again not much to see.  Just before the Adur bridge Chris and David said goodbye, leaving Angela and Julian to return to the Shoreham Station where the barrier was down for trains in each direction, and once re-opened Angela went to her car to squeeze in her cycle, and Julian just missed an eight coach train and waited 15 minutes for a four coach train to dismount at Hove Station, finally reaching home at 5.30 pm.

Thank you to David for a ride with no “undulations” along the 26 miles, so welcome after Jim’s last two rides, though there were a range of rigid speed bumps across the private roads.

This entry was posted on Tuesday, November 3rd, 2015 at 11:21 am and is filed under Ride report. You can follow any responses to this entry through the RSS 2.0 feed. You can leave a response, or trackback from your own site.