Not So Bleak Midwinter Edition

So far I’ve had  no offers to lead rides from 10 January onwards.  As I said last time, If you are stuck for inspiration have a look at the detailed  rides on Jim’s website https://jimgrozier.wordpress.com/cycling/.  Or look through previous rides on the blog/previous website. As long as we aren’t doing the same ride every fortnight there’s nothing wrong in repeating those we have already done. And if you crave orgininality you could always plan to do the ride in the opposite direction from last time! Please don’t rely on the “usual suspects” coming forward; sooner or later they are going to get fed up if they are left carrying too much of the burden.  We were in a similar position this time last year – but offers soon came forward – so I live in hope!

Twelve of us invaded the Café Rouge at the Marina: Angela, Anne, Fred, Jenny, Jim, Joyce, Julian,  Leon, Mick, Roger, Sue and me.  Angela had asked us to meet from 12 30 onwards ready to eat at 1 p m.  As the hour approached concerns began to be expressed about the non-arrival of Jim. Roger tried to phone him without success.  Wild theories were exchanged; he’d gone to the other Café Rouge by mistake; he’d been abducted by aliens. But on the stroke of 1 o’clock – or more or less – he appeared. 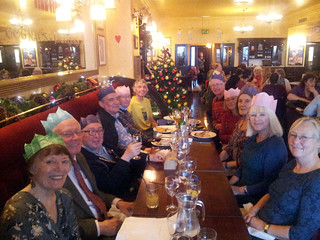 Meanwhile Anne had distributed some snazzy glittery brooches featuring little Christmas trees among other seasonal emblems.  The jokes in the crackers were of the usual high quality (!) but everyone seemed to enjoy the food and we were well looked after.  As usual when you’re enjoying yourself time speeded up.  Mick had to leave early to return to work.  Roger thanked Angela for organising the party on behalf of us all and all too soon it was over and we were off on our separate ways.

Just to remind you, we altered our constitution at this year’s AGM to allow for the AGM to be held a lot later than has been the case up to now – anytime for 1 January to 31 March.  There are advantages to holding it a little later – among other things it will make it easier for us to take a collective position on at least some of the things that may be proposed at the national AGM at the Easter Meet.  So I’m proposing to call it for a date early in March, (Easter is early next year)

When it does take place one thing we will have to decide is whether to reinstate (or increase) our £1 p a local sub  At this year’s  AGM, in order to make life a bit easier when it comes to collecting the subs – so that we know right at the start of the year how much we need to pay – we adopted the system of  deciding it a year in advance.  So, if you think we need a local sub (or you don’t) please come along prepared to make the appropriate proposal.

Sue and I are quite happy to host the AGM but if anyone else would like to take it on this time – needs to be someone fairly central – do let me know.

As I wrote last year after the second time we had re-scheduled our traditional little “Brunch” ride to Carats café to 2 January “we couldn’t have had a sunnier day for our New Year ride this morning.”  Let’s hope we are lucky with the weather again but if it looks like being better to revert to New Year’s Day – or go for 3 January – I will make sure to let you know in good  time  – so do check your emails.

Meanwhile, this is the last newsletter for 2015 so the usual hearty season’s greetings to everyone.  All the best for 2016!

The subscription is unchanged at £8, all of which will be passed on to the National Clarion Cycling Club as in 2015.

Prompt payment would appreciated.  Membership ceases if payment is not received.

If you prefer to pay by BACS, details of which are shown on the form, please use your surname as reference.  If you want to save a stamp and not send me the form, then email me at: arkell@arkell.info to confirm your payment via BACS.  Payment by PayPal is not possible

This entry was posted on Thursday, December 17th, 2015 at 12:22 pm and is filed under News. You can follow any responses to this entry through the RSS 2.0 feed. You can leave a response, or trackback from your own site.