We meet at the south side of Chichester railway station at 11.15 am and then go round over the railway level crossing to the north side to start riding on the cycle track from the car park.  After a mile we begin a northward ride on the Centurion Way track and in about three miles we take the West Stoke Road which has a gentle rise until the middle of the village.  We turn south into Lye Lane and on down until we go round the north and east of Fishbourne and pass under the A27.  We take the Salterns Way bridlepath past Apuldram and, as a short diversion, soon reach the Crown and Anchor Public House at Dell Quay – probably before 1.30.

After lunch we continue on the Salterns Way track south and cross over the Chichester Salterns Marina lock gates to reach the Chichester Old Ship Canal.  At the northern end of the Marina Entrance road at Cutfield Bridge we cross over the A286 to take the minor road east to the B2145 T-junction then north through Hunston to the Poyntz Bridge, a footbridge over to the west side of the canal and onto a wider well-surfaced track.  From this bridge there is a distant view of Chichester Cathedral apparently surrounded by green fields and trees and no sign of any urbanisation.  The ride ends at the Canal Basin where there is a fine Canal Trust tearoom.

Meet on the south side of Chichester railway station at 11.15.

Terrain:  a gentle gradient up to West Stoke, then downhill to the north of Fishbourne, and thereafter mainly flat.  17 miles – see O/S Explorer Map 120 “Chichester” (1:25000)

There are three busy roads to cross:  B2178 SE of East Ashling, A259 in Fishbourne, and A286 at Cutfield Bridge.  However, we do not have to cycle along them.

Lunch:  at the Crown and Anchor, Dell Quay, with a quite expensive menu.  The Boat House Café prices at the Salterns Marina are probably lower.

Tea: by the Chichester Ship Canal Basin, just south of the railway station.

SN: stops at all stations before Brighton

C: change at Hove, with three stops before Hove 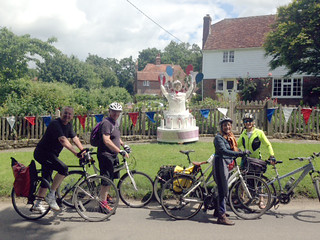 After all the shocks of Black Friday & the dismay at finding ourselves no longer part of the EU or Europe as we used to call it, what a joy to be out & about around the Ouse with Clarion’s Lewes members in charge & awaiting us at Lewes Station. Us, being Sikka, Tessa, Joyce & myself. All aboard the 10.47, with me scraping on with Joyce ‘s help with ticket machine due to losing bike lock keys at last minute.

Sue is somewhat apprehensive as last time they led a Clarion Ride 13 turned up & 1 got lost. [Note from Assistant Webmaster: The head count for that ride was actually 18½ – see the ride report here.].

There was a bit of coming & going this time but all were safely accounted for, in the end. We soon met Chris who was to be our backstop & he helped Joyce up the 1st hill of Station Street, Lewes as it is difficult to start on any hill & more so on electric bikes. He warned that there were some hills on the ride & we soon encountered more. Not before we’d met some more riders though. There was “dashing” Paul & his partner Tanya, from Brighton & Henry from Essex, all new to Clarion, & Debra from Lewes, who is friend of Chris & Sue & joined us en route on another hill. Another Ann joined too, but she left before lunch as found the pace too fast.

As the 4th hill loomed into view we were offered the choice of the road or the pavement & Sue led the latter charge. The path on the pavement was narrow, bit twisty, bit overgrown, uphill & bit difficult to manage & I wished I’d taken the road option. Not easy to swap over though & didn’t like to stop as recalled previous tricky places where I’d stopped & Joyce behind me had collided into me – that was in a big puddle over the Levels on a ride led by Ian years ago, so I clung on & finally summited, where it began to gently rain, but the other 6 by now waited.

After about 5 minutes, backstop Chris arrived but brought the news that Joyce had decided to go back as finding the bike difficult to control on the tricky path uphill. I dithered as to whether to return to Joyce & decided to do that as it was what I told her I would, but then, herd instinct kicked in & I followed our leader, with Chris trying to calm my conscience. Now I thought I should check how Joyce was & we eventually caught up with Sue & the Brighton Clarion 2. Neither Tessa nor Sikka had Joyce’s current phone number & I am mobile phone free/ useless/hopeless. At the next chance to stop I ask Tessa to try to contact someone who does have her number & eventually we get Mick between his golf & his AGM & he finds Joyce having a coffee at Lewes Station so I am relieved.

By now we have reached Piltdown Fishing Lake & no photos have been taken, though the countryside is beautiful, views extensive, homes interesting & innovative, summer flowers in bloom & little traffic on quiet lanes. As we approach Isfield for the lunch stop finally we have a super photo op. There is a village Fair with a scarecrow competition & several wonderful displays mainly connected with the Queens 90th b’day, but some with delightful sheep [one looking like a baby panda, amid the scarecrows where we posed].

We arrived at The Laughing Fish around 1pm & were fortunate that although the village fair was busy as was the pub, the service was quick & the food delicious. Think it was Tanya who had a splendid banoffie pie, my soup, Sue & Chris’ sandwiches & even Henry’s cheesy chips all went down well in the garden & we chatted away about the referendum & what will become of us! “What is to be Done” indeed! After the folly of the Brexit vote we are with no prime minister & both main parties in turmoil.

The route back to Lewes seemed easier along quiet lanes & then the bike track from Ringmer. Here we had a another dramatic episode as Sikka noticed a body lying in the grass between the bike track & a lay-by on the busy B2129. A young man, plumpish & with many piercings was prone in the grass & Chris, Tessa, Sikka & I tried to wake him. We stopped a passing runner too & after some more prodding decided to call an ambulance. About 5 minutes later the body moved! Finally he got up & moved away from us & made a mobile phonecall with his back to us. Not sure whether he was pleased to be awoken or not, but he had been very still & deeply comatose. Now Chris had to phone the ambulance service again & cancel any speeding rescuers.

Finally back to the river at Lewes & reunited, only to separate again, with Debra & dashing Paul cycling back to Brighton via Ditchling Beacon, Tessa & Sikka stopping for tea, Henry hurrying homeward to Brighton for a bike maintenance course tomorrow & the 3 Lewes natives going home after a splendid summer’s day with super cycling. Thanks very much to Sue & Chris for organising & leading us & hope to see everyone again on another Clarion Cycling Club excursion.

Summer is with us at last and Anne’s report on the most recent ride paints a wonderful picture of a summer’s day of cycling full of incident and enjoyment.

Looking ahead we have the prospect of a trip to the every popular Crown and Anchor at Dell Quay on 10 July led by Julian.

Then there is a blank in the programme on 24th July.  There don’t seem to be any engineering works planned on the railways so the world (well Sussex anyway) is our oyster.  Who will step forward to fill the gap?

Ian should be back in front of his computer before the next newsletter so please send ride offers etc. to him.

CCC Sports from ‘Cycle Trifle’in The Clarion, 6 Augusts 1898 . The column began by asking reports to be addressed to ‘King of the Road’ at the paper’s Fleet Street office.

From Brighton: 10:47am Seaford train, gets in to Lewes at 11:02am.  Will need to check trains nearer the day to make sure no engineering works or other problems.

We will meet you at Lewes station and process up Station Street in orderly fashion (possibly walking, depending!), to arrive at the Elephant and Castle pub, where we may meet up with others from Lewes.

Terrain: Easy with one long incline and one short steep hill.  All on road except for the last section on the Ringmer cycle path but roads are generally quiet.

The ride goes up through Barcombe to Piltdown, turning by the fishing lake and then going round and back through Isfield with a stop at the Laughing Fish pub.  We have always managed as a bike group to fit into the garden of this pub so hopefully this should be fine, but if anyone wants to make a proper reservation just in case,  the phone number is: 01825 750349.  We should arrive at the pub around 1pm barring any major hold-ups.

After lunch, there is a quiet section round the back of Ringmer which may be familiar to many of you, and we end up back in Lewes on the Ringmer cycle track.

Julian arrived at the Velo Cafe at 10 am and it began to rain.  Angela came at 10.20, having being driven by her son in the car, as she was not feeling well.  She left at about 10.40.  Joyce came on her bike at about 10.25 just to say hello to the riders, having been absent from recent rides.  By 10.50 no one else had arrived so Joyce and Julian returned home, just as the rain stopped.

Was it the rain, or was it the wind, or perhaps the naked bike ride? Whatever it was, it persuaded all but one Clarion rider not to join Angela’s planned ride and picnic yesterday.

Angela, meanwhile was not well and did not feel up to leading a ride. So, many thanks to her for getting to the start point to make sure no one was left wondering what was happening; get well soon Angela!  And thanks to Julian for writing the report (see below).

Our next ride will be on 26 June starting at Lewes station (full details below). Let’s hope for good weather and a good turnout.  Clothes will be worn!

This seems to be an early encounter with a sauna. From Cycle Trifle’in The Clarion, 22 October 1898.