Meet by the Palace Pier at 10.30 a m – or along the route at e g Maroccos. Only about 9 miles (there and back) – plus from home to the Pier of course. 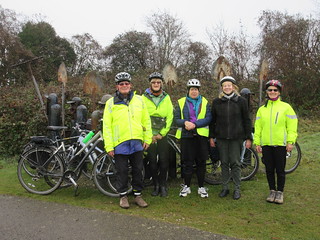 Five people – Corinne, Julian, Sikka, Tessa, Angela D – travelled on the 10am train from Brighton. We waited for a while in Chichester, but no-one else turned up to join us.

During the train journey Sikka & Corinne tried to book a table for lunch at the Crown and Anchor at Dell Quay, but unfortunately it was already fully booked until 3.15pm. (NB You need to book online, preferably a couple of days in advance, as it is very popular:
www.crownandanchorchichester.com)

We had left bright sunshine behind in Brighton, and found ourselves in fairly heavy mist in Chichester, which cleared up gradually during the day.

We set off shortly after 11pm, riding on the cycle track leading away from the station car park. After a mile we turned north along the Centurion Way track. When we got to the group of rusty iron centurions, we made a photo stop, as we had not taken a group photo at the station, and a passer-by took a couple of pictures of us (see above).

We continued on our way, taking the West Stoke Road, then turned south into Lye Lane.

We stopped for lunch at the cafe at the museum by the Roman Palace in Fishbourne, where we were the only customers for most of the time we were there. There was a fairly limited menu, mostly just jacket potatoes & warm paninis. Chief topic of conversation was travel & holidays, including a recent cruise & a forthcoming yoga retreat in India.

When we arrived at the cafe there was a camper van parked outside with two small dogs inside, barking noisily when approached. The van was still there by the time we had finished eating lunch. The two women working in the cafe shared our concern about the dogs, and one of them went over to the museum and found the owners, who returned and let the dogs out for a walk as we were leaving.

We remounted our bikes and continued on our way along the Salterns Way track south and crossed over the Chichester Salterns Marina lock gates to reach the Chichester Old Ship Canal.

At the northern end of the Marina Entrance road, at Cutfield Bridge, we crossed over the A286 to take the minor road east to the B2145 T-junction, then north through Hunston to the Poyntz Bridge, a footbridge over to the west side of the canal and onto the wider well-surfaced NCN2 track. From the bridge there was a marvelous distant view of Chichester Cathedral rising out of the lingering mist.

The ride ended at the Canal Basin, just south of the railway station. We arrived there at 2.50pm and made a ten-minute stop at the Canal Trust tearoom before returning to Chichester Station to catch the 3.15pm train to London. We travelled back in sunshine, all the mist having finally burned off by now. We all got off at Hove, from where Sikka & Corinne caught a train to Brighton straight away – fortunately the train service was very good today.

Thanks to Julian for a very enjoyable ride.

Well, even after delaying this newsletter as long as I thought reasonable so far, at least, no one has spotted any problems with my proposed ride schedule for 2017 – or if they have they haven’t got round to telling me.

But nor have I yet had any offers to lead the January rides – 8 and 22. Let me know ASAP if you can take either of them on.

3rd Party Insurance
Having third party insurance cover has always seemed to me to be a ‘no-brainer.’ Apart from periods when I didn’t have a bike, I’ve had it since I joined the CTC (now Cycling UK) in 1954. I’ve never had to use it – which is fine. It’s still good to know you have the cover. One of the less unlikely situations where one might need it is if, riding in a group as we do on rides, you accidentally damage someone else’s machine. The prices of cycles and components these days means that could be an expensive business. Julian emailed me last week with the latest on the new Clarion scheme. Here’s his message:

Alan Kiddle of the NCCC told me today that:

“For 2017 we are very excited to be able to offer all paid up National Clarion members the opportunity to purchase 3rd Party Cycling Insurance for only an additional £12 per year. “Clarion Cover” is underwritten by Royal Sun Alliance and has taken a lot of hard work to negotiate. There is an article about Third Party Cycling insurance on the BBC website which you can share with your members. http://www.bbc.co.uk/news/business-18994991“

If any member, who has already paid the £8 annual sub, wishes to get the insurance cover, an extra £12 should be sent to me by cheque, or paid by BACS to the Club bank account with an email confirmation sent to me.

The 2017 AGM
Just to remind you, we altered our constitution to allow for the AGM to be held a lot later than has most often been the case previously. Now we can have it anytime for 1 January to 31 March. There are advantages to holding it a little later – among other things it will make it easier for us to take a collective position on at least some of the things that may be proposed at the national AGM at the Easter Meet. So I’m proposing to call it for a date sometime in March.

When it does take place one thing we will have to decide is whether to reinstate (or increase) our £1 p a local sub for 2018 (In order to make life a bit easier when it comes to collecting the subs – so that we know right at the start of the year how much we need to pay- we adopted the system of deciding it a year in advance.)

If anyone, preferably someone living fairly centrally, would like to host the AGM please let me know. We’ll try and sort out the best day of the week nearer the time.

Making the roads safer
There’s been a lot in the news recently about increased penalties for dangerous driving. One of the most encouraging features of the current situation is that Cycling UK (the old CTC as was) is working closely and harmoniously with the AA. It’s got to be good that the best known car drivers’ organisation is not some irresponsible Jeremy Clarkson style outfit but a sensible and responsible one. Of course, having a transport secretary who knocks a cyclist off his bike and then tries to blame it on him is not a promising start.
What follows is from a joint press release by the AA and Cycling UK at the end of last month which I picked up from Cycle Clips.

Cycling UK’s Senior Road Safety and Legal Campaigns Officer, Duncan Dollimore, said of the campaign: “Now is the time to make distracted driving, like texting and driving, as taboo as not wearing a seatbelt or drink-driving. We must tackle this problem head-on because it led to 22 deaths and 440 crashes last year.

“Cycling UK wants to see drivers who repeat-offend off the road before they kill or cause serious injury. Something the current review will not address. That is why Cycling UK has joined forces with the AA – to show Government that road users are collectively serious about ending avoidable deaths and serious injuries on our roads.”

AA President Edmund King said: “The devastating consequences of distracted driving are vividly portrayed in our latest campaign film, Cadence, which we released last week. Hopefully, our collective efforts to affect behaviour change, together with the Government’s recent announcement intending to increase penalties for mobile phone use while driving, will help to make this mobile madness socially unacceptable.”

Cyclist Lee Martin was killed last year by texting driver Christopher Gard. The tragic incident took place just six weeks after Gard had dodged a ban and kept his licence, because of the ‘exceptional hardship’ loophole, despite having six previous convictions for driving while using a mobile phone.

Duncan Dollimore added: “The Government must act now to prevent grotesque spectacles like this Gard case from happening again.

The New Year
Julian tells me that so far 21 out of 48 members have renewed. If you haven’t yet please make his task a little easier by doing so. I shall carry on repeating Julian’s message about subs and attaching his renewal form into the New Year. Please make this redundant as soon as possible. See below for details of how to do that.

Having, as some perceptive and alert readers have noted, managed to make at least oblique reference to both François Villon (où sont les neiges d’antan from Ballade des dames du temps jadis) and Lewis Carroll (Jabberwocky) in my ride report in the last edition of this newsletter I have resolved to avoid any literary allusions – at least for the rest of this year!

It’s time to than all those who have contributed to the success of the club during 2016, Thanks to Angela for organising the Christmas event (see below), to everyone who led a ride during the year, to all the report writers and to all those who directly or indirectly made contributions to this newsletter.

I will try to put out a reminder after Christmas about the New Year ride on 3 January – and the first ‘proper’ ride on 8th if we have one by then. But this will be the last full newsletter for 2016 so the usual hearty season’s greetings to everyone. All the best for 2017.

The subscription is unchanged at £8, all of which will be passed on to the National Clarion Cycling Club, as in 2016.

Prompt payment would appreciated. Membership ceases if payment is not received.

If you prefer to pay by BACS, details of which are shown on the form, please use your surname as reference.  If you want to save a stamp and not send me the form, then email me at: arkell@arkell.info to confirm your payment via BACS. Payment by PayPal is not possible. 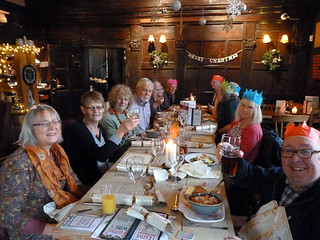 On a pleasant winter day 12 Clarionists: – Angela, Anne, Chris, David, Fred, Jenny, Joyce, Julian, Leon, Mick, Sue and Terry arrived ready to enjoy convivial company and good food. We only regretted that Jim, Ian and Sue would be unable to join us.

After admiring the impressive wood panelling and that we were in the oldest most secular building in Brighton & Hove, dating from the 1500s, and one second only to the Royal Pavilion as being the most listed, we settled in to enjoy the quick efficient service and good food which was soon accompanied by the usual discussions ranging through food, wildlife, politics (inevitably) twitter as communication or not, discussion made much more diverse by moving along one seat after each course.

We left well sated and mentally stimulated with thanks to Angela for organising such a pleasant get together.

‘Repining over what might have been’ and hopes for the future from ‘Cycle Trifle, in The Clarion, 16 December 1899. (Note for optimists – Puntureless tyres are more or less with us now!)