The last newsletter was a bit of a rush job but the one before featured quite a lot of Ken Well’s reminiscences of the mid-20th century Brighton Clarion. I have had a few more emails from Ken since then which I have arranged into what follows. Ken was a pilot officer in the RAF during national service, about which he has some interesting things to say. But we begin with one of the photos that appeared in the 4 April newsletter. 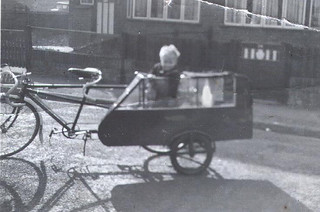 That picture of Tandem and Sidecar. The tandem was a Claud Butler one, and I rode it in quite a few Tandem Time Trials with various stokers. When my wife Pearl became pregnant we acquired a standard “Watsonian” sidecar. I don’t know when they stopped making these. They only took one baby. When second child was on her way, I built a new body from scratch on the same chassis. I had to strengthen the attachment bracket, but it served until our daughter, the rear passenger, was about five. Then we acquired a car.

Back in my era, National Service was compulsory, which often led to people giving up cycle racing. Being sent to far off shores without a bike for two years often led to that. I spent nearly all my two years on Aircrew training, so I was in this country, although quite a bit of it took place in Northern Ireland. I did get a bike across there, my sports afternoon was ride to Belfast (30 miles) and go to cinema.

There were a few club cyclists on the station, and I organised a four-up team time trial between the three RAF stations in NI on our perimeter track. Another snippet, about my time with the RAF in Northern Ireland, I managed to get a bike over there. Found a set of rollers in the Gym, and amused others by demonstrating you did not need holding up, and could even ride “hands off” on rollers.

We were allowed an afternoon off for sports. Mine was often to ride to (Belfast) 30 miles) have a meal, go to cinema then ride back. I did ride down to Newcastle Co. Down, on edge of Mourne Mountains near the Irish Border. There was no local club nearby, unlike Scotland when I rode for Clachnacuddin CC in a couple of local time trials.

Some people did manage to keep up cycling while on National Service. When I was on basic pilots course at Derby, I used to take bike to and fro when going on leave, I could get across London faster than a taxi.

In my era, most of us found girl friends and eventually wives from club members or members of other clubs I met mine on a club excursion. Few of us had cars in those days, so coaches were hired to visit major cycling events, often at Herne Hill. I met my wife to be at a roller race meeting in Bognor while I was on leave from the RAF. The club (Prestonville) had hired a coach. It worked out well. We have been together now for nearly 70 years

Thanks Ken. Can’t remember who said it, but someone at our AGM did say that it was time we had something in the newsletter about our own history as the current B&H Clarion. I think Ken’s contribution is probably enough history stuff for this time but I have in mind to tell the story of how we started back in 2004 – possibly in the next issue.

This entry was posted on Wednesday, May 3rd, 2017 at 11:49 am and is filed under History. You can follow any responses to this entry through the RSS 2.0 feed. You can leave a response, or trackback from your own site.