Morning: The ride starts at 10.50 am on the north side of Polegate station; there is a public lavatory a few yards north on the road we then take.  We cross over the B2247 onto the start of the Cuckoo Trail and soon turn right to ride through a narrow wood for half a mile, until we turn left to go over the A27 into Shepham Lane which goes north-east, across the B2104, and soon a turn right into Glynleigh Road.  After a left turn the road goes downhill and after a sharp left corner we turn immediately left to pass Rickney Farm.  Shortly afterwards a right turn takes us north over the Pevensey Levels, via New Bridge and on up to the Magham/Pevensey T junction.  Here we turn right going along Lower Road until a sharp left into Church Road that takes us through Flowers Green and Chapel Row to the Lime Cross Nursery, on the other side of the A271, for lunch in the café.

Afternoon: After lunch we go west for half a mile along the A271 into Herstmonceux and right onto the minor road uphill through Stunts Green to the Cowbeech Hill junction.  Then we go left and south-west down a long minor road and turn right (by the A271) onto New Road going west, which is soon disused and gated off, but can be cycled along, until we cross over a busy road and come into Station Road and turn left onto the Cuckoo Trail just before Hellingly.  Once on the Cuckoo Trail, apart for some time on the level through Hailsham, it is gently downhill all the way back to Polegate station.  Tea can be taken at the Old Loom Mill Craft Centre and Tearooms, passed a mile before the station.

Terrain:  mainly flat or minor uphill gradients before lunch.  The road from Herstmonceux to Cowbeech Hill is uphill, but not severe.

It is about 9 miles both before and after lunch at Lime Cross.

And, as you’ll see further on, with no ‘Last Ride’ report.

As ever, I intended to put the newsletter out on Tuesday.  It was almost ready, missing only the ride report.

Julian contacted me to say that someone on the ride had offered to do the report, but that he discovered later, after the ride, that the person concerned was new the the club and probably had little idea of what was required.

Worse, neither Julian or I seemed to have an email (or phone number) to try to establish contact.  I don’t think I can wait any longer without making problems for those who might be planning to go on the next ride Sunday week, so with great reluctance and apologies all  round I’m sending this out incomplete.

However, if anyone on last Sunday’s Dell Quay ride likes to send me a report I’ll send it on to you. If I get more than one that’s fine too!

As reported since the last newsletter the September rides are now covered – thanks to Julian (again!) and Mick. And thanks also to Sikka and Tessa who also volunteered for 17th a little later than Mick.  I hope they will be able to offer their ride before too long – perhaps one of the 3 rides scheduled for October?   But all offers for the 3 dates will be very very welcome.

I’ve had the following message from Angela (D). It’s self explanatory and I hope someone will be able to help.

The Labour party conference is taking place in Brighton between 24-27 September.

Bricycles, the local campaigning group for cyclists is taking MPs and others on a short cycle ride along Hove sea front on Monday 25th September.

We may need to borrow a few extra bikes. Is anyone available locally who would be prepared to lend a bicycle or two?

Just a reminder. If – like Angela above – you have anything you’d like to see in the newsletter please send it me.  Always on the look-out for good ‘copy’!

This is from The Clarion, 4 July 1896.  Dangle was of course A M Thompson – a co-founder and virtual joint editor of the paper and also a librettist of a number of successful musicals of the Edwardian period, the most famous of which – and biggest hit – was The Arcadians. Blatchford himself –as Nunquam – had a longer piece – ‘The Dangers of the Wheel’ in the same issue responding to Swiftsure’s comments.  The mudguards which moved with the front wheel sounds a whole lot more dangerous to me!

This is a ‘circular’ route as cycled on five previous occasions.

We meet at the south side of Chichester railway station at 11.15 am and then go round over the railway level crossing to the north side to start riding on the cycle track from the car park. After a mile we begin a northward ride on the Centurion Way track and in about three miles we take the West Stoke Road which has a gentle rise until the middle of the village.  We turn south into Lye Lane and on down until we go round the north and east of Fishbourne and pass under the A27.  We take the Salterns Way bridlepath past Apuldram and, as a short diversion, soon reach the Crown and Anchor Public House at Dell Quay – probably before 1.30.

After lunch we continue on the Salterns Way track south and cross over the Chichester Salterns Marina lock gates to reach the Chichester Old Ship Canal. At the northern end of the Marina Entrance road at Cutfield Bridge we cross over the A286 to take the minor road east to the B2145 T-junction then north through Hunston to the Poyntz Bridge, a footbridge over to the west side of the canal and onto a wider well-surfaced track.  From this bridge there is a distant view of Chichester Cathedral apparently surrounded by green fields and trees and no sign of any urbanisation.  The ride ends at the Canal Basin where there is a fine Canal Trust tearoom.

Meet on the south side of Chichester railway station at 11.15.

Terrain: a gentle gradient up to West Stoke, then downhill to the north of Fishbourne, and thereafter mainly flat.  17 miles – see O/S Explorer Map 120 “Chichester” (1:25000)

There are three busy roads to cross: B2178 SE of East Ashling, A259 in Fishbourne, and A286 at Cutfield Bridge.  However, we do not have to cycle along them.

Lunch:  at the Crown and Anchor, Dell Quay, which we will have to book online before the day.  So please email Julian by Friday 18 August at latest, if you will have lunch there.

Tea: by the Chichester Ship Canal Basin, just south of the railway station. 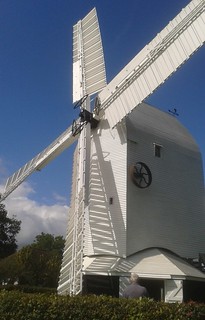 Angela D, Corinne, Jim, Joyce, Julian, Leon, Prudence. Sean, Sikka, Tessa and Wendy travelled by train to Hassocks. Two new recruits on electric bikes were prevented from joining the ride, one of the bikes had a dodgy pedal that could not be fixed without specialist tools, and the bike was brand new!

Helen and Angela C met us in the car park. There was a mishap here too, Helen, our leader getting temporarily stuck in the station lift. 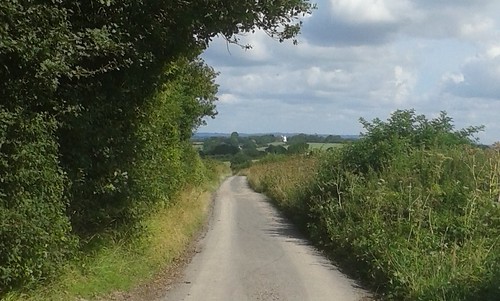 Lodge Lane, looking north with Oldland Mill in the distance

In the centre of Hassocks we turned right to join Underhill Lane that runs along the shadow of the Downs up to West Meston. A short stretch of main road followed until the turning for Streat. Lovely downhill swoops followed by gentle uphill to Streat Place. 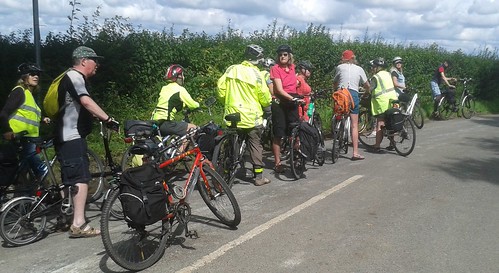 We took the road to Plumpton Green stopping for a refreshment break at the Plough Inn alongside the memorial for the fallen WW2 Polish airmen. 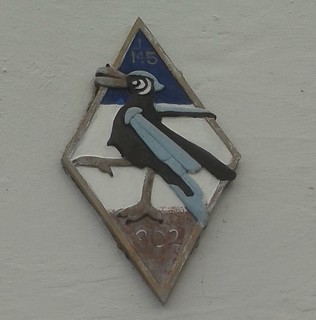 Emblem on the Polish war memorial

Helen lengthened the ride to Wivelsfield by taking us into Plumpton Green village where we turned onto a broken concrete farm track by the old Rising Sun pub now a posh house with the same name.

We regained the road, passing the Plough Inn again as we headed for the Cock Inn in Wivelsfield. A buzzard and an open top Rolls Royce were spotted en route..

We divided into three groups, two out in the garden and one inside for lunch in this well liked pub that has excellent food, reasonably priced.

After lunch we headed out into sunshine, which during the morning had been hit and miss, quite cold when there was cloud cover.

We set off down 100 Acre Lane fringed by ripening wheat and cornfields, into a headwind. The headwind seemed to follow us which ever direction we took. Spatham Lane brought us to Ditchling turning into East End Lane where we wove through the backstreets to Boddington Lane.

Here we divided into those who were prepared to embrace a muddy offroad track and those who preferred a longer ride on tarmac. The offroaders arrived at Oldland Windmill first, with almost clean feet! We all sat in the sun drinking tea and eating homemade cake. Sikka used all her strength to move the windmill a fraction so the sails tilted to catch more wind. 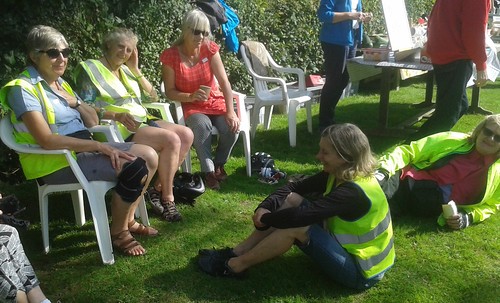 We made a dash for the station down a concrete road called Grand Avenue and were well in time for our train. But no sign of Helen? To say goodbye and thank you for a really lovely day out.

So, a day earlier than usual this time. All thanks to Tessa who was quick off the mark to report on yesterday’s ride and to Julian who sent me his ride details about a fortnight in advance.

The less good news is that so far we have no offers for the the two September rides on 3rd and 17th .  Anyone want to take one of them on?

Our membership tends to fluctuate – sometimes we’ve been up to between 40 and 50. Julian tells me that currently we have 35 – nineteen women and sixteen men.  Excellent!

From time to time in these newsletters I include extracts from Cycling UK’s (the ‘brand name’ of the CTC) Cycleclips.  Sometimes they are celebratory, sometimes amusing and sometimes like the one I included last time about the huge proportion of bike thefts that are unsolved a bit worrying.  But for mind-blowing-ness I think this one has few competitors

Cyclist caught riding his bike 10 miles up the motorway

52 year old Balin Hobbs was found cycling down the hard shoulder of the M5 this week. According to the BBC article, Balin then cycled from London to attend the court hearing because it was against his spiritual beliefs to be driven in petrol or diesel vehicles. The journey took him three days and he slept on the courtroom steps the night before the hearing. If you’re ever in need of finding a cycle route, don’t forget our free journey planner … it won’t take you on the M5!

Well worth a visit will be Tessa’s latest show Art in Clay at Hatfield House, 18th 19th & 20th August. The details she has sent me are a bit too long to be included in this newsletter so I will be forwarding them separately.

Finally, we really do need an offer for 3rd September sometime in the next two weeks.

One of the more exotic headings for the ‘Cycle Trifle’ feature from The Clarion 17 September 1898.