Meet by the Palace Pier at 10.30 am – or along the route at e g Maroccos. Only about 9 miles, (there and back) – plus from home to the Pier of course.

Do check your emails on New Years Day after 5 pm – just in case.

Angela D, Wendy and Julian met at Brighton Station and took the 10.14 train to Burgess Hill. At first we  walked along a soggy footpath parallel to the railway on its east side. A kind young man helped lift our three bikes over a low style where the footpath ended. The bridleway, with a better surface, then took us NE, first across another railway with unguarded gates, to Hope Farm, just after we had left the clutches of the extending Burgess Hill.  We soon crossed the busy B2112 and arrived, partly on very narrow muddy tracks into woodland and then to pass across the Ditchling Common Country Park, the higher open parts exposing us to strong cold wind gusts. Leaving through the car park, we headed south on the Spatham Lane minor road when the heavy rain started and continued until we reached the B2116 just east of Ditchling, which we skirted on its north side down East Lane.

Thoroughly soaked we arrived at The Bull Inn by 13.00 pm and noted its newly opened south side extension. We were ushered to a back room with a table for four by an open log fire, the heat from which soon dried us out. The menu was extensive, including catering for a Vegan diet. The three of us tucked into excellently prepared plates of food, served by friendly young staff.   Apart from exclamations over the splendid flavours, discussion centred on the effects of class and financial inequalities on state and private school and university education and also on the use of the NHS.

Fully sated we hurried west along the main road through Keymer to the Hassocks Station. When a sodden return rail ticket was rejected by the platform entrance gate, modern technology came to the rescue, whereby the Assistance Unit enabled the station attendant on a different platform to view the ticket and open the gate. Our 7 mile excursion had been carefully planned by Angela and Wendy on two outings – no wonder, with The Bull Inn feasting test!  Other members had missed out on a pleasant ride, appropriate for a short and cold winter’s day. Thank you Angela and Wendy.

2017 has been a very good year for me on many ways – but not cycling-wise. Since I broke my ankle two years ago and had to lay off the bike for 3 months I have found it difficult to get back into a regular rhythm and since the summer my habitual back problem has started to turn into occasional leg problems. But I’m determined to be OK for the little ‘brunch ride’ on 2 January and I hope after that to gradually get back to where I can come out on a Clarion ride from time to time.

After that, at the moment, there is nothing planned. If anyone wants to take on 7 or 21 January let me know and I’ll pass the message on so no one else will spend time planning for the same date. And I’ll include it in the brief reminder I’m planning to send out sometime between Boxing Day and New Year.

The First New Year Brunch Ride
Until recently we always had our short New Year ride to Carats café on New Year’s Day. But eventually the place got more and more popular so we switched to 2nd January (or 3rd Jan this year because 2nd was a bank holiday). Here’s the report that appeared after the first one in 2006. Some of the names will be familiar, but – to my shame – I can’t remember Mei who wrote the report. Anyone remember? Joyce?

The city seemed still asleep that morning after the previous night’s celebration of the New Year. Clarion riders gathered by the Palace Pier for the first ride in 2006.

Ian wasn’t sure who would be coming. Fred, Sheila and myself were waiting to see if there would be others. Luckily, Jim and Annie came toward us, then Anna, Lucy and Stuart. Finally there was Joyce.

As usual, Fred took a group photo by the Palace Pier then we set off to the Carats Cafe. The clouds were thick and grey. Seagulls appeared and disappeared in the gloomy sky.

Around noon we arrived at Carats Cafe. It had already lots of people inside so, despite the cold wind, we sat outside. Everyone introduced himself/herself again and we had a relaxing talk. Stuart mentioned that, he had seen a line of cars with their wing mirrors smashed, presumably as part of the New Year’s Eve ‘celebrations.’

Also, Sheila asked where the “Boots and Spurs” came from and Ian explained its history to us. After the food and chat, we set off home all looking forward to the next ride. Joyce, Sheila and Fred cycled to the end of the Carats café area. Ian thought they would came back so we could cycle back together to the pier. However, they still didn’t reappear after ten minutes or more. So Ian and I decided to leave. On the way home, more and more people seemed to have appeared on seafront on that windy New Year’s Day.

< Some photos of this ride can be found on the old website – scroll down… http://fred.eu5.org/clarion-old/archive_winter2005.html – Fred>

The 2018 AGM
Just to remind you, some years ago we altered our constitution to allow for the AGM to be held a lot later than had most often been the case prevously. Now we can have it anytime for 1 January to 31 March. There are advantages to holding it a little later – among other things it will make it easier for us to take a collective position on at least some of the things that may be proposed at the national AGM at the Easter Meet. So I’m proposing to call it for a date sometime in March.

When it does take place one thing we will have to decide is whether to reinstate (or increase) our £1 p a local sub for 2019 or leave it suspended. (In order to make life a bit easier when it comes to collecting the subs – so that we know right at the start of the year how much we need to pay – we adopted the system of deciding it a year in advance.)

If anyone, preferably someone living fairly centrally, would like to host the AGM please let me know. We’ll try and sort out the best day of the week nearer the time. 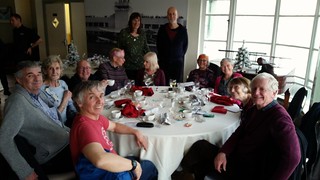 The Christmas Lunch
It wasn’t the most inviting start weatherwise yesterday but it did clear up nicely and quite surprisingly and after the meal when Sue, Jim, Angela and me visited the Old Toll Bridge whose fund-raising rides for restoration we took part in some years ago, the sun was shining on the river and the downs so wonderfully in a way that made it difficult to remember how the day had begun with such unpromising weather. We went to the bridge to have a look at the memorial to those killed in the terrible Shoreham air show disaster.

But the miserable weather around lunchtime made it more impressive that Jenny and Fred arrived at the Humingbird by bike. [If anyone else did that I failed to register let me know and I’ll record your feat next time!]

As well as the aforementioned the lunch was attended by Richard, Charlotte, Jim, Joyce, Leon, Anne, Suzanne, Roger, Angela (C) – who had organised the feast – and Sue and myself. That made 13 altogether but anyone with undeclared superstitious tendencies must have breathed a sigh of relief when Mick turned up having successfully survived an earlier visit to the dentist. The food was fine but some of the jokes in the crackers were almost as feeble as the sort I’ve been known to tell. For example:

‘What do Santa’s little helpers learn at school? The elf-abet.’ (Groan!)

The party poppers were more impressive and Leon, in particular, demonstrated how they could be deployed to the best effect. Roger made a little speech thanking Angela (and me – quite undeservedly).

So all the best for Christmas and the New Year and thanks again to Angela for arranging the lunch.

Some not so good advice from Clarion 11 December 1897