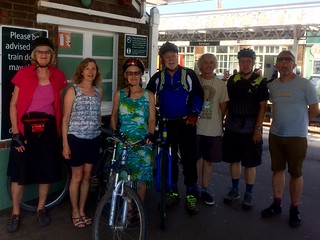 As the 2018 July heatwave continued, seven Clarion cyclists gathered in Barnham station for the start of a promising new ride devised by Jim. (Not that new! See here – Jim)

Sunday newspaper headlines were all enthusing about the progress England had been making in the World Cup, so the Clarion cyclists decided to take the advice of England’s manager and ‘create their own history’ as they headed out on the highway for a 20 mile cycle ride.

Our first break, a couple of miles after leaving Barnham, was an unscheduled one. Jim had to perform an emergency pit stop operation on his bike chain in order to continue with the ride. Although Jim’s DIY skills left him with impressively greasy hands, we were all relieved that his bike was roadworthy again. 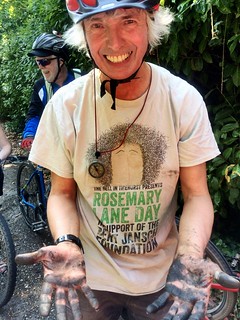 Aldingboune Country Centre was the first official cycle stop for the group and was a good place for some of us to drink coffee, annotate maps and sample iced lollies away from the heat outside.

The ruined 12th century Boxgrove Priory was our next stop and was well worth the slight detour required to visit it.

One of the attractions of Jim’s route was that it was, as he promised, ‘very flat’. The Centurion Way was a great way to cycle to our lunch destination and included very welcome tree shade from the day’s 30 degree heat.

Sitting in a comfy chair with the iced water served at Wellies Restaurant could have been sufficient for me to recover from the morning’s exertions, but I decided to also ask for the serious cyclist’s meal of choice: a bowl of chips. 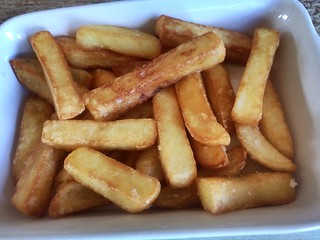 Salads, baguettes & quiche were also popular with my Clarion comrades. Possibly the biggest attraction in Wellies was Hardy, the extremely friendly restaurant dog, who befriended us all. 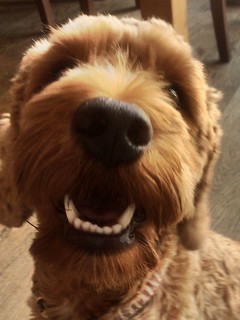 After lunch, the route took us to Southbourne railway via the local villages of West Stoke, West Ashling (the weather really was too hot for the ducks & swans trying to shelter in shade under the trees around the duck pond) and Funtington.

The final planned stop for the group was for tea and cake in the Woodmancote pub. I don’t usually combine alcohol and cycling, but felt a pint of cider was a good way to cope with the hot weather. 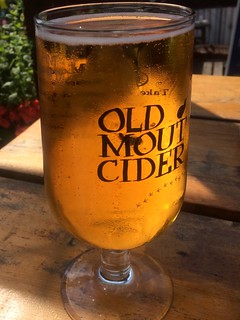 It was only a 10 minute cycle ride from the Woodmancote pub to Southbourne railway station and the train journey home. We all agreed that Jim’s planning, combined with exceptionally fine weather, had contributed to a great day out. I’m not quite sure why this was my first Clarion ride in nearly two years, but I really must try and return again very soon! 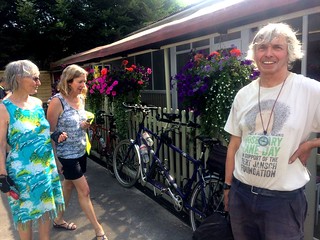 Sikka, Wendy and Jim admiring tandems at the Woodmancote pub

This entry was posted on Monday, July 16th, 2018 at 10:47 am and is filed under Ride report. You can follow any responses to this entry through the RSS 2.0 feed. You can leave a response, or trackback from your own site.