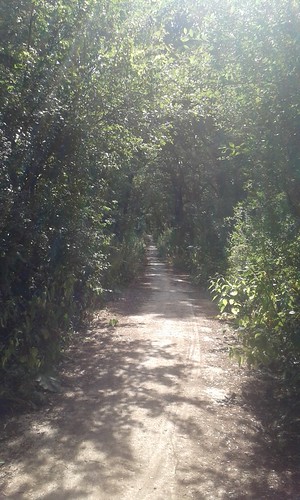 Angela and Wendy’s ride attracted 8 riders determined to brave the heat wave: a reunited “Dieppe Four” (Angela D, Ivor, Wendy and I) were joined by Ann, Graham, Mick and Prudence. We quickly left the road and, skirting the southern shore of Arlington Reservoir, joined a lovely wooded byway which eventually led us to a lane. Then the lane forked. 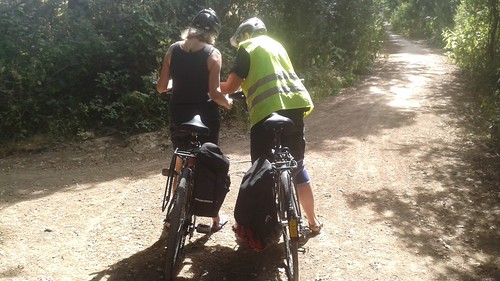 Conferring at the fork

Left or right? There was much consultation, and it was eventually agreed that the right fork was the correct one. However, two of our number, Prudence and Ann, had by this time decided to try the left option, with Mick chasing after them like a sheepdog to return them to the fold. The remaining five of us took the byway through the middle of Abbot’s Wood.

“There are many ways through a wood”. I made that up, but it’s profound and inscrutable enough to have been said by some long-dead Oriental philosopher. The trouble is, those ways don’t necessarily meet up again on the other side, especially if one of them doesn’t actually go through the wood at all. We were not to see the others for many a mile, though we did see lots of other cyclists, some clearly making for France.

According to the Arlington Village website, Abbot’s Wood “was once part of the great Saxon forest of Andredesweald, which stretched across the whole of the south-east of England as far west as Hampshire”; it was overseen by the abbot at Battle Abbey, which gave it its name – although the OS map shows the remains of an abbey much nearer than Battle, just north of Polegate; this abbey was apparently part of the order of Premonstratensians, a word that’s worth remembering as it will probably get you quite a high score in Scrabble.

This lovely track went on for about two miles, but eventually we had to emerge into the housing estates of Hailsham. However a treat awaited us – in the middle of Hailsham, surely one of the most boring places in England, Bebble’s Langos, a Hungarian café serving the traditional deep-fried dough with various fillings – anything from banoffee or rocky road to mushroom, pepper and onion. 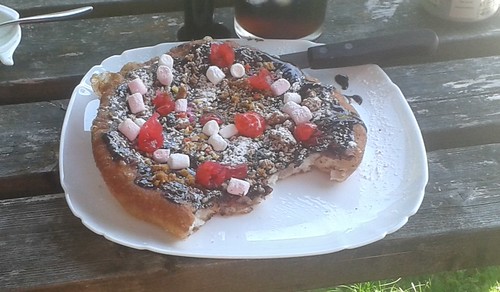 Rocky Road Langos (minus a bite or two)

While enjoying this “second breakfast”, we heard news of our lost comrades, two of whom arrived just as we were finishing.

Cycling could be viewed as an activity to be pursued between meals. And indeed, after a bit of Cuckoo Trail, some quiet lanes and a farm track with lovely views, we reached the lunch stop, the Merrie Harriers at Cowbeech, where Mick had already polished off his roast. One of these lanes was called Grove Hill, and, while that word is banned in Clarion circles, Angela did explain that there might be the odd “levitation”, which she put down to an unfortunate tendency of her map to tilt forward.

There were posters all over Cowbeech imploring us to “Dig for Victory”, but it was not clear what was going to be dug, nor what sort of victory the diggers hoped to achieve. Google can only offer the obvious WW2 reference, a Brighton clothing label, or a North Somerset festival. Is Cowbeech somehow stuck in the 1940s?

After Stunt’s Green, Ginger’s Green and a crossing of the A271, we reached the wonderful Pevensey Levels, and followed a winding lane and a bit more Cuckoo trail all the way to Polegate. A swan and three adolescent cygnets on the adjacent waterway nearly caused a multi-bike pile-up at one point, as this constituted a mandatory photo-stop.

The ride length was reckoned to be about 22 miles. Then the train back to Brighton. The by-now-traditional after-ride swim was forgone due to various personal commitments.

Thanks to Angela and Wendy for a very enjoyable ride through some (to me at least) interesting new territory. 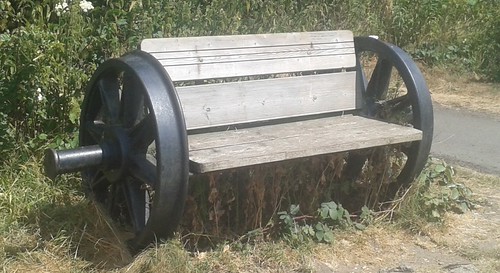 This entry was posted on Wednesday, July 25th, 2018 at 2:50 pm and is filed under Ride report. You can follow any responses to this entry through the RSS 2.0 feed. You can leave a response, or trackback from your own site.