Polegate to Pevensey via Herstmonceux and the Astronomical Observatory

The Clarion crowd met at the station, David, Sean, Angela C, Wendy S and Angela D, awaiting their leader, but ever optimistic that something would turn up, assembled in the train. Just as it was departing, Graham dived into the train, followed by the Pru. Were they dallying in the waiting room? Dawdling in the coffee shop? No matter, we were off.

We scooped up Mick and Ann at Polegate Station, and cycled a few hundred metres to our first stop – Polegate’s conveniently placed public conveniences.

The first part of the ride was Arcadian bliss with bits of sunshine, lovely rambling through the Pevensey levels and an all-round state of expectancy and fun. This is never a good moment for Clarionistas, for it generally presages a doom-laden scenario of future disaster, and so it was this time.

As you all know, we are near the anniversary of the moon landing and we were threading our way through the back routes leading to the Observatory. The combination of possible space travel and a star-gazing mission, alas went to our leader’s head, and round about a disused sky tower he propelled us into a cosmic orbit which led us into one of those black holes we hear so much about. Stoically the Clarionistas followed while our leader must have faintly heard the strains of ‘Ground control to Major Graham’ https://www.youtube.com/watch?v=iYYRH4apXDo 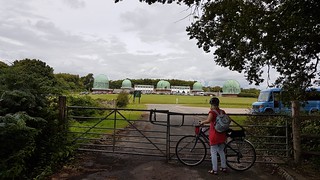 And, as you know, it does not end well. Meanwhile, amongst the crew, there were stirrings of dissent and mutterings of ‘My cosmonaut outfit is at the cleaner’s!’ and ‘I am not convinced these protein balls are 100% vegan’ ‘I am not going without my little Laika’ https://www.space.com/17764-laika-first-animals-in-space.html

So our space-addled leader took his head away from the clouds and returned us to the ground and we were all instructed to back-pedal madly – we are good at this Clarionistas – especially if we think there might be a picnic at the end of it.

So the last part of the ride was a straight, no-nonsense road, entirely divorced from a fantasy life of orbiting astronauts and cosmic rings; we were all glad to assemble safely, with our more sedentary companions who knew nothing of our space travelling adventures, in the grounds of Pevensey Castle. 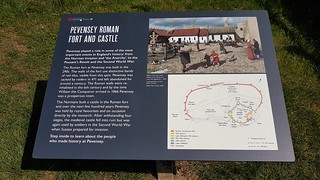 On arrival at Pevensey Castle folk dispersed briefly – Pru and Graham hit the café, in need of coffee, David and Sean disappeared into the pub in need of beer, and the rest of us joined the advance party, comprising Joan, TJ and Nye – all the way from their new home in Wakefield, and Clarion National Chair, our own dear Secretary Ian, with Sue and Joyce. Some of us were surprised to learn of Joyce’s near election as our MEP for SE Region around 1992 and to hear more about her campaign, with help from Sheila Shaffer. The castle ruins made a picturesque backdrop for our picnic, and folk shared some delightful delicacies such as strawberries, beetroot cake, pork pies, home-made bread and choc and banana loaf. 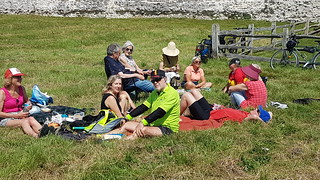 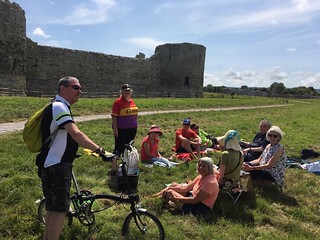 Suitably refreshed, and the ride having officially finished at Pevensey Castle, ideas began to emerge as to how to spend the rest of the afternoon. Ian, Sue and Joyce returned to Brighton by car, Joan and family called in to the café for afternoon tea before continuing their ride, Angela D went off to contemplate a swim at Cooden Beach, Graham and Pru decided to return via Eastbourne and the remaining Clarionistas cycled off towards Polegate, with Mick taking over the yellow jersey. Our arrival at Polegate Station was perfectly timed, thanks to Mick who thoughtfully added in a short detour ensuring that no time was wasted hanging about on the platform! As our train pulled away from the Station, it was lovely to catch sight of Anne waving us off at the barrier, reminiscent of Jenny Agutter in the Railway Children.

Thank you Graham for thoughtfully planning this summer picnic, to include an enjoyable cycle across the levels plus options for arriving by car and train. It was lovely to see some of our Clarion friends who have been unable to join us on rides for a while. Folk seemed to appreciate the pub and café options, and there was no shortage of ideas for routes home from Pevensey.

Portslade to Withdean Woods via the Chattri

It was Portslade station where Tessa, Sikka, Angela, Marilyn, Wendy & Nick gathered for Dave’s mostly off-road cycle route, which took us along the Dyke Railway Trail to Devil’s Dyke, Rushfield’s Garden Centre Cafe, Pyecombe and along the South Downs Way to the Chattri Memorial. The route ended in Patcham & Withdean Woods. 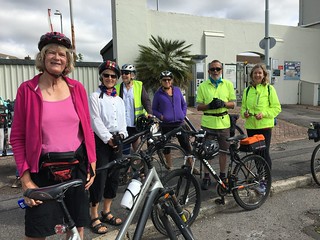 Highlights included Wendy’s tomato soup in Rushfield Garden Centre’s cafe, the narrow path descent from Devil’s Dyke (which most of us considered far too treacherous to cycle down) and the always magnificent Chattri Memorial.

Sikka, Marilyn & Tessa had to leave the ride before the end, so we were reduced to a quartet for the Pycombe Church afternoon picnic. This was an excellent day of summer cycling, which avoided most cars and busy roads.

At Portslade our leader Dave, had a health and safety announcement regarding the importance of ICE or what to do In case of Emergency so we could all have our friends and relations know what had befallen a Clarionista en route. Now Dave is mister inventor and scorns conventional and ungainly methods in favour of his own, homemade devices.

It appeared that Dave had all our next of kin addresses and details invisibly tattooed on his forehead; to make these details appear all he needed to do was gently rub the site with a handful of Sussex grassland or a few leaves from the wild. All this information would be available to whoever needed it…except of course to Dave himself. Unfortunately the days when genteel Clarionistas would never go out for a ride without an elegant little device known as a powder compact which allowed lipstick and other fripperies to be discreetly applied en route with the aid of the mirror in the box (also helpful for signalling and making fires in the wild and many other uses which need not concern us here), as I say these days modern manners prevail and now everybody holds in their hands a mobile phone or suchlike. What to do in the event of a mass Clarion combustible incident, leaving Dave alone with the names and numbers of our loved ones and him unable to read them?

A resourceful, television addicted member of the Clarion team came up with the solution; there would be a Designated Survivor, similar to the television series (she recommends it highly). The difference would be the designated person would not be assigned the role but it would be left to chance; we, as Clarionistas, would make sure one member of the group (as well as Dave of course) would stay alive and well enough to read off the numbers inscribed on Dave’s forehead.

We all agreed this was an excellent idea and were able to set off. Dave is a hero straight put of The Perils of Pauline (1914)

A series from the silent era which I’m sure many Clarionistas will remember. Dave led some of us (others were too sensible, or too cowardly, or pleaded the sensitivity of their electrical bicycles) along a winding and perilous route down Devil’s Dyke, towards an abyss with a sheer wall to one side of the path and a drop of several thousand feet on the other. I am sorry to report that your narrator had an attack of altitude sickness; the world spun round; I dared not look down; going forward on the narrow path was impossible and reversing unachievable. 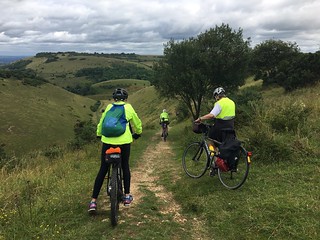 My companion on the path, far from wishing to help in any way, was poised ready with his camera to capture the exact moment when the photogenic fall took place. I believe he has form on this issue – but I am pleased to report I arrived at the bottom of this crevasse as he was suffering from a disruptive form of the bicycle bends. Dave, among his many gadgets, had a portable decompression chamber but pointed out Rushfields café was not that far Many other adventures befell us (as with The Perils each instalment will form part of a serial to be shown in cinemas weekly – enough of Netflix!) but we were all agreed that Dave was an excellent leader, very patient and calm and carefully keeping his scattered Clarionistas wonderfully together. Many thanks to him for leading this ride. 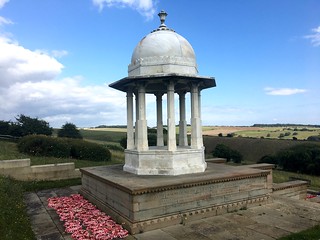 This entry was posted on Friday, August 9th, 2019 at 12:48 pm and is filed under Ride report. You can follow any responses to this entry through the RSS 2.0 feed. You can leave a response, or trackback from your own site.