By sheer luck and by minutes to spare, Jim, Sally and I managed to get to Brighton station before a major downpour which, unfortunately, Angela D, Sikka and Nick did not avoid and consequently arrived somewhat wet and bedraggled.  Still, the downpour did not dampen spirits as we boarded the train to Havant, checking the Met Office weather report once on the train which reassuringly stated that the sun would be out in Havant.

Arriving at Havant Station, the sun was indeed out and we began our ride. From there it is a short ride to the beginning of the causeway that links the south of Havant to Hayling Island and, cycling along the causeway in the sunshine, Angela D, Sikka and Nick began to warm up from their drenching. From the causeway you have amazing views across the Langstone Harbour towards Portsmouth and the unmistakeable landmark of the spinnaker tower. 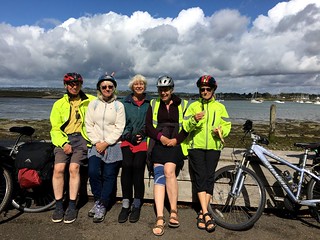 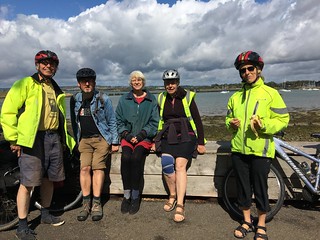 Once on Hayling Island you cycle along an old railway line with further wonderful seascape vistas. There were many stops for photo opportunities, including one of a lone egret paddling on the shoreline, hoping to catch its lunch. We continued along this path for a few miles in the lovely sunshine, though it was quite windy, winding through the residential part of Hayling Island, until we reached the southern point and the beach where we were to have lunch and some people wanted to swim.

Unfortunately, there were quite a few windsurfers in the water, making swimming possibly quite hazardous and, with the wind now quite strong, the sea did look a bit choppy and so the swimmers decided against going in. So, we had our lunch sitting on some benches on the seafront and had a look at the very tall, stone WW2 memorial to a group called, ‘Combined Operations Pilotage Parties’ who went on secret reconnaissance missions on proposed enemy held invasion beaches and whose information evidently saved the lives of thousands of service men and women. 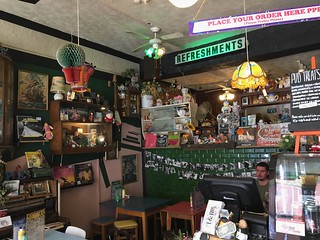 After lunch we set of to the south-western tip of the island to catch the ferry across to Portsmouth. Angela D, having done a recce with Sally of the route, took us past a rather amazing Victorian crescent which would not have been out of place in either Bath or Brighton, but which did seem rather out of place on the island. Evidently, built in 1825 it was to form part of a vision of Hayling Island as ‘Utopia by the sea’ but that vision never came to fruition. Norfolk Crescent stands alone as a reminder of the rather grand future that had been planned for the island.

We then boarded the little ferry, most of us not having to produce ID to prove we qualified for concessionary tickets, except for Nick who, of course, is a ‘spring chicken’ compared to many of us!!

Sikka and I agreed that we love the excitement and adventure of a ferry ride as it is just such a wonderful feeling being out on the open sea with the wind in your face and there certainly was plenty of wind.

Arriving in Portsmouth we began the final stint along the seafront to the station to get home.  By now the wind was really strong and we were riding directly into it. Sally and I found it too difficult and got off our bikes and walked with them. It was perfectly fair enough that the stronger riders went on, especially as Angela D had to get back to Brighton by a particular time.

So, after we got off the seafront into Portsmouth itself, it was Jim, Sally and I who arrived at Fratton Station in Portsmouth to get the train home.

Many, many thanks to Angela D and Sally for organising this very pretty and interesting ride and I do hope we will do it again when, hopefully, it won’t be quite so windy.

Cheers and love to everyone –

This entry was posted on Friday, August 23rd, 2019 at 3:38 pm and is filed under Ride report. You can follow any responses to this entry through the RSS 2.0 feed. You can leave a response, or trackback from your own site.