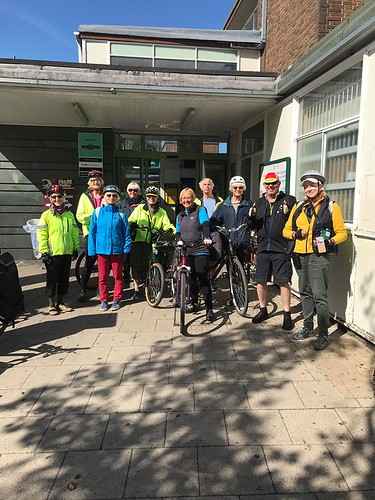 Ten Clarionistas caught the Chichester train – it was good to see Jenny and Joyce after too long an absence, along with Angela C, Corinne, Sean, Sikka, Tessa and Wendy T. Unfortunately it was also the day Southern chose to unveil its new bike policy of a maximum of half a bike per carriage, evenly distributed along the train, with all the skilfully bisected half-bikes leaning against the doors so that they had to be shifted across on the command “We are now approaching Hove”. The guard was very nice and polite, but her strict rules turned out to be somewhat at variance with the official policy laid down at https://www.southernrailway.com/travel-information/on-board/bringing-a-bike. No doubt Southern are attempting to undercut the Great Western, whose policy of 1⅔ bikes per carriage on the Great Malvern service seems absurdly generous ….

Passing through the network of lakes on the site of an old quarry (Ivy Lake, Copse Lake, East and West Trout Lakes) we headed out through North Mundham and beyond on a quiet lane, with plentiful birds, butterflies and blackberries and fields stretching out to infinity. We saw a lovely Comma butterfly with its scalloped wings, but it was unfortunately rather camera-shy.

We continued onto a bridleway, following the NCN88 signs (if you “get your kicks on Route 66”, what do you do on Route 88? Seal your fate …?) and so to Sidlesham Quay where we had our picnic, sang “Happy Birthday” to Sally, and marvelled at the achievement of 18th century water engineers who had built a huge tide mill here, the only remnant being the brick platform on which we sat, and the pool beyond. (Sometimes one wonders whether “technological progress” is not perhaps an oxymoron ….) 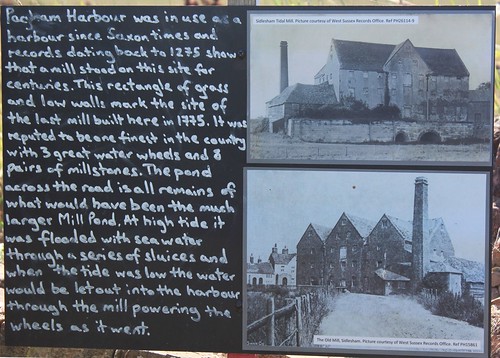 After Angela D’s warnings about the political affiliations of the inhabitants of Hayling Island, we were heartened by a prominent “Stop Brexit” sign here. 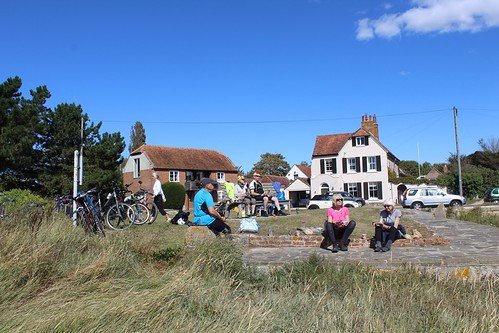 While we tried to identify a mysterious wader, Tessa passed around some photos taken by Leon, and one of his drawings, and Joyce announced that a special memorial ride for Leon is to take place on 20 October.

RSPB Medmerry was just a loo stop, where we had to weave around a large crowd of bird-walkers doing a roll-call before setting off. More bridleways and narrow paths took us to Itchenor where the little ferry boat, now apparently officially named the Itchy Bosom, loaded up with bikes, but unfortunately not ours, as we were at the back of the queue. While waiting on the jetty we watched the large electric solar-powered catamaran, the Solar Heritage, complete with electric wheelchair lift, docking – but had to turn away when it appeared that the wheelchair would be propelled straight into the water on the other side of the narrow jetty … but no, they just managed to turn it around and save its occupant from an unscheduled dip. 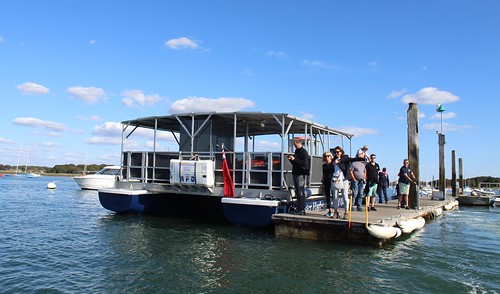 Jenny took a shortcut to Chichester while the remaining 9 had a welcome tea stop at Bosham, with teas, coffees, milkshakes, crumble and toasted teacakes. We then set off for the final crawl to Chichester via Fishbourne, bisecting our bikes once more in order to comply with Southern regulations. Thanks to Sikka and Tessa for a wonderful day out, and for shepherding us so well with their well-known leader-and-backstop routine. All Clarion rides should be like this! 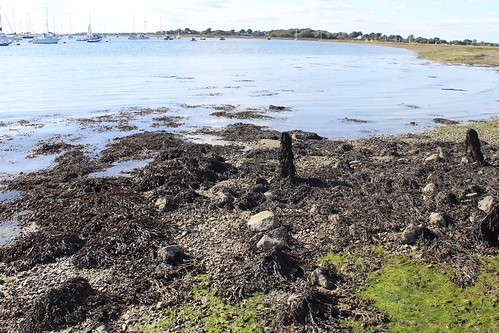 This entry was posted on Monday, September 16th, 2019 at 5:43 pm and is filed under Ride report. You can follow any responses to this entry through the RSS 2.0 feed. You can leave a response, or trackback from your own site.