Ever so slightly bleary eyed we assembled at the station in the very early hours of the morning, barely able to make one another out in the almost pre-dawn gloom, but my vision was not so badly obscured as to not observe rather enviously the coffee clutched in our leader’s hands.

We decanted at Haywards Heath the back way to make as precipitate a departure as possible from that dormitorial suburb – apologies to those mistaken apologists for that god-awful town. The plaintive cry of ‘When is the coffee stop?’ soon emerged from Jim’s followers. ‘At the elephant!’ he cried – I believe Jim recently attended a rewilding talk by the excellent Dr Chris Sandom, University of Sussex, where Dr Sandom discussed elephants twice as big as African ones roaming the Sussex landscape in the Palaeolithic era. Jim, mindful of every eventuality, had provided all his followers with whistles to prepare themselves in case of their sudden reintroduction, although I can assure all concerned Clarionistas that the whistles were not needed for that purpose on this occasion. We arrived at a café cum shopping centre at a crossroads – and found to our delight a pleasant café, apparently, according to Jim, called The Elephant, though no such sign was visible, where we sat on a terrace overlooking a charming garden. Delight soon turned to distress as we discovered a party of 50 had arrived just before us and we might have to wait a while. Clarionistas can be stoic so we discussed not only the extinction of the Sussex elephant but of the country as a whole; we were, of course, feeling a touch guilty about enjoying the view and not joining in one of the demonstrations happening in Brighton. 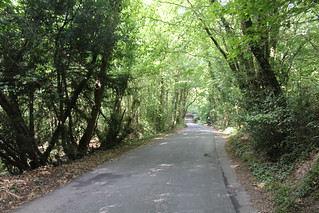 Very soon after our coffee stop we were at our lunch stop The Peacock  but undeterred we ordered; as our plates arrived we looked at one another helplessly as there seemed no one present who was able or willing to say grace, I mean of course the Instagram ceremony, the modern version of grace, where all food is photographed before consumption, so rather sheepishly we tucked in without a smart phone blessing. I can only offer my deepest regrets that no Clarionista will be able to partake virtually of our excellent meal. I do remember fish pie, vegetarian risotto and wild boar sausages. Our whistles, apparently, are also a good deterrent to the latter, the boar that is, before their sausage state.

Continuing our excellent adventure we were rather detained by what Sally claimed was essential practice in sharp shooting from the hip with a gun in each hand. Now I know some of you will be a little astonished that not all Clarionistas are signed up members of the Anti Blood Sports League, but it appears that Sally is the founding member of the Pot Shot Action Against Undesirable Tories, and knowing that next week I am going right into the heavily militarised Thorney Island she was determined I should learn to protect myself. Accordingly, some time was spent riding my bicycle as fast as possible with my hands initially in my pockets and then releasing them suddenly and twirling imaginary pistols. Perhaps fortunately no live ammunition was present as I am notoriously astigmatic and might well have incapacitated our leader or another hapless Clarionista. 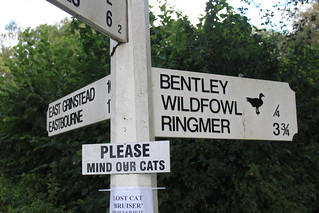 After lunch we wobbled on – this is an exact word as for various reasons we were all a little unsteady on our wheels. Corinne because she kept peering at her heart rate on the mini surveillance gizmo she attaches to herself and every time it hit 308 she leapt anxiously out of her saddle because she thought she was having a heart attack; Sally because she insisted on leaning backwards going uphill because she heard the cawing of a raven – in fact it was probably me shrieking ‘Horsham slab’ at passing rooftops or East Mascalls manor house https://historicengland.org.uk/listing/the-list/list-entry/1025621 and Jim because he attempted to ride his bike into any passing shed thinking it might be his longed for pumphouse http://www.villagepumps.org.uk/pumpsSussex.htm – but somehow or another we pottered along the lovely Norlington Lane, having ridden up the avenue of lime trees to Bentley wild fowl museum to discover that the whole reserve was closed and now given over to industry https://www.sussexexpress.co.uk/news/shock-closure-of-leading-family-attraction-in-sussex-1-8691586 – perhaps a nice little metaphor for the way this country is going?

At the Depot café by the cinema in Lewes we collapsed, looking like wasted extras from a late-night horror movie, onto outdoor sofas and we would probably still be there had Corinne not sensibly rounded us up to catch a train back to Brighton.

Many thanks to Jim for organising and leading this ride.

This entry was posted on Monday, September 16th, 2019 at 5:42 pm and is filed under Ride report. You can follow any responses to this entry through the RSS 2.0 feed. You can leave a response, or trackback from your own site.