Shoreham to Lancing; or Shoreham Circular with a bit missing

The weather forecast had not been promising: 90% probability of heavy rain, after a day or two of continuous rain – maybe not ideal conditions for an off-road ride on the South Downs. I had persuaded my friend Susanne to try out a Clarion ride, so we met at Brighton station, where there was a marked absence of other Clarionistas. At Shoreham there was only Dave, our leader. He had had no other indications from Clarionistas, and two of his non-Clarion friends who had planned to come had cried off. So that left just the three of us. 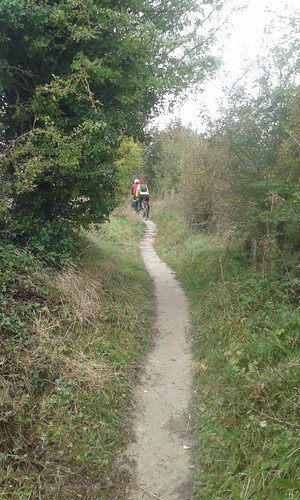 We popped into Shoreham Co-Op because I had forgotten my scran, despite Dave reminding us that we’d need to bring this mysterious item. In this respect I was indebted to Susanne, who, being rather more computer-literate than me, had discovered that scran is “a term used for food generally in the north of England, originally used by the British Royal Navy” – a relic of Dave’s coastguard days. Suitably scranned-up, and ready for a 13-14 mile circular ride, we were led across the Toll Bridge, over the A27 and up past Lancing College Chapel, on a road I hadn’t been on before, which became a stony path, and later a muddy path. This led through Lancing Ring nature reserve. We were now 110 metres above sea level, with glorious views of the downs, the chapel, and, beyond it, Shoreham and the sea itself.

Here, Susanne experienced the “Rampion effect”, whereby wherever you are on the coast, the wind farm appears to be just opposite where you are. (This illusion is caused by the fact that we forget that it’s eleven miles out to sea, so its bearing hardly seems to change as you move east-west). We could see, across the Adur, the hillside where the power cables had been buried, and Dave explained that the engineers had taken great trouble to re-plant the same native species they had dug up, thus preserving the ecosystem. 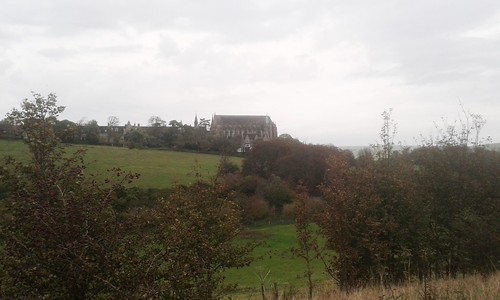 In fact we all then experienced another form of “Rampion effect”, related to the reason why the turbines were put there in the first place – a strong south-westerly wind, which was just beginning to bring a fair amount of icy water with it when we reached the bench designated for scran. It was here that Dave sadly discovered that his coffee flask had jumped ship somewhere along the path. After a hasty bite and guzzle, interspersed with attempts to stop more bits of us from blowing away, we pressed on, but we were fighting a losing battle. Dave and Susanne made more-or-less simultaneous decisions to turn back, while I was scurrying between the two. I could not disagree with their good judgement.

This ride was destined to make a hardened off-roader long for tarmac, and so Susanne and I did not need to work too hard to persuade Dave to lead us to the nearest bit – a car park just south of the nature reserve. Here he left us, returning along the path to search for his lost flask, while we whizzed down Mill Road, across the A27 and so to Lancing Station for the train home, with the mileometer on 5.7 miles – but what a 5.7 miles!

I am indebted to Dave for introducing me to the “Rough Stuff” style of cycling, and hope to ride with him again in better weather – and with Susanne too, if she was not too deterred by the wind, rain and mud. 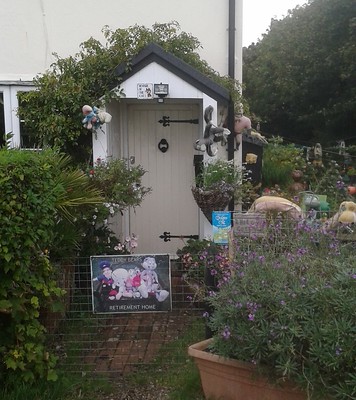 Now you know where to take your old teddy bears!

This entry was posted on Thursday, October 24th, 2019 at 1:02 am and is filed under Ride report. You can follow any responses to this entry through the RSS 2.0 feed. You can leave a response, or trackback from your own site.