Just beyond WH Smith and the International Arrivals area, there are lifts enabling passengers and cyclists to leave Gatwick Airport. It was a team of four Clarionistas (Tessa, Doris, Jim & Nick) who pushed their bikes past armed police, uniformed plane crews and confused plane passengers to find the lifts to leave the airport. 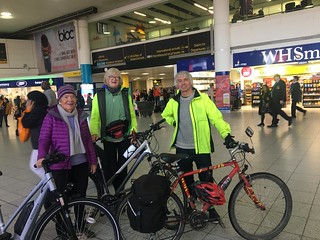 Before locating the exit lifts, we gathered on the Gatwick Airport concourse for a brief photo opp in front of WH Smith and took the opportunity to visit the airport’s luxurious loos. Sunday’s bike ride was particularly memorable for the backdrop of trees and autumn sunshine which accompanied visits to Riverside Garden Park, Hammonds Copse Nature Reserve, an intriguing bus stop and some eco protest solidarity. 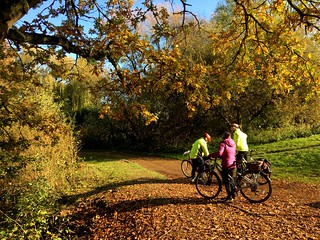 Riverside Garden Park is a very short bike ride from Gatwick Airport. The Garden Park lake, surrounded by vivid autumn tree colours, was worthy of a brief stop to take a few photos. We then followed Cycle Route 21, Surrey Cycleway Link and assorted twists and turns in a nine mile journey to the Plough pub lunch stop in Leigh

While waiting for our lunch in the Plough we all agreed that cycling in the morning, with low sunlight and autumn leaves, had been picturesque and enjoyable. My lunch consisted of a plate of chips and pint of lime & soda. Other food options were available though.

Tessa handed out flyers over lunch to remind us that she would be busy with her artists’ Open House from late November to early December. I must try and go along.

As we left the Plough after lunch, we noticed an ornate and distinguished looking wooden bus stop on the village green. We didn’t see anyone waiting for a bus, so perhaps this was another rural location without a Sunday bus service. 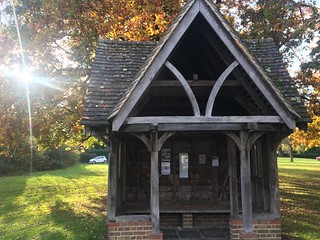 It was Remembrance Sunday and we saw quite a few outsized poppies attached to traffic signs, as we started the post-lunch leg of the day’s cycle ride. 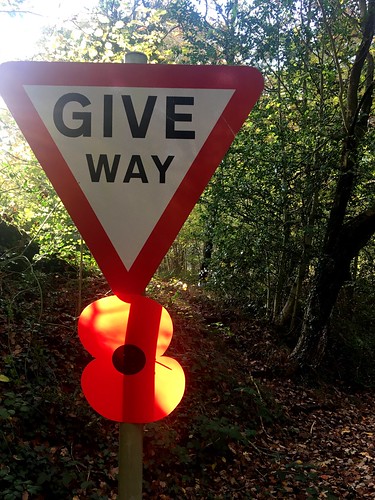 Dramatic autumnal colours were on display as we cycled through Hammonds Copse Nature Reserve. The muddy conditions caused by the recent heavy rain weren’t particularly welcome, but the waterlogged path we found ourselves on didn’t last for very long.

It was a delight to meet two activists from the Horse Hill anti-fracking camp on our way back to Gatwick Airport. Jim was given a big hug when he explained that we were part of a socialist cycling group which had been founded more than a hundred years ago.

We were given leaflets on drilling, acidisation & fracking in the South East, which Surrey County Council has encouraged. I tended to agree with the Horse Hill campaigner who said the recent moratorium on fracking from the current Tory government was nothing more than an election ploy.

After our brief spell of Horse Hill eco-warrior activism, it was time to cycle back to Gatwick Airport train station. Thanks to Jim for a perfectly planned and rather glorious autumn cycle ride.

This entry was posted on Friday, November 15th, 2019 at 9:24 pm and is filed under Ride report. You can follow any responses to this entry through the RSS 2.0 feed. You can leave a response, or trackback from your own site.