This was another ride from the archive. Moving the start to Emsworth from Warblington was definitely a good idea: we very soon got off main roads and into quiet lanes with lovely autumn colours, and marvelled at the number of old flint houses in the valley. We also saw two 12th century flint churches, but did not go inside, preferring to save our churchgoing for the 11th century St Hubert’s at Idsworth, with its wall paintings. 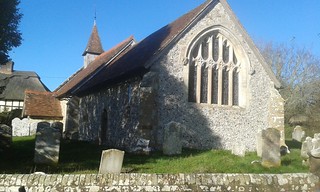 Wells are not as frequent a feature of our rides as churches, but there were two on this ride – as well as the promised thatched one at East Marden, Angela C pointed out a smaller well near our lunch stop at Compton. I wondered whether a preponderance of wells could be connected to the dryness of the river bed in some way – it’s a pity neither of our retired water engineers could make it for this ride, as they’d no doubt have had a ready answer to that question. 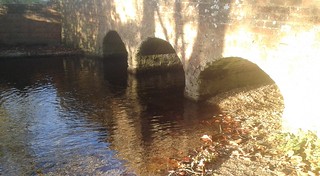 Angela D pointed out that the geography of the area would have made settlements such as Stoughton and East Marden easily defensible. It also helps, along with the narrowness of the lanes (some of which have grass growing in the middle) to make it a natural “backwater” for motor traffic, and hence very popular with bikes and other less common forms of transport. On the recce ride I had overtaken a little pony trap at Westbourne, but there were few horses in evidence on the ride itself, and thankfully, no tractors. Also no motorbikes, which had plagued an earlier recce.

The sky was overcast, and quite gloomy by the time we reached Idsworth, so St Hubert’s was put on hold for another occasion, and we pressed on. Wilma and Angela C opted to return home from Rowlands Castle station, while Angela D and I took Woodberry Lane where, half way to Westbourne, Angela noticed a newish-looking cycle path leading off through the woods, and signposted to Emsworth, so we decided to try it out. Despite a paucity of signposts further on, by astute use of the compass we eventually found ourselves back at Emsworth station with just under 20 miles on the clock. 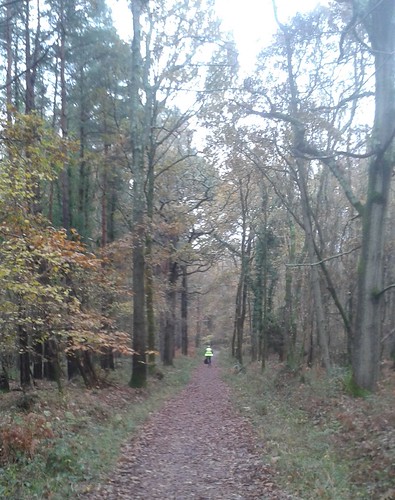 Angela and I agreed that further adaptation of this ride would be possible, perhaps linking it up with one of our favourite cycle paths, the Centurion Way, which now seems to be called the New Lipchis Way. Perhaps whoever takes it on next could have a think about that.

This entry was posted on Saturday, November 30th, 2019 at 11:29 pm and is filed under Ride report. You can follow any responses to this entry through the RSS 2.0 feed. You can leave a response, or trackback from your own site.