Four keen riders, Anne, Doris, Prudence and Angela assembled at the Palace Pier at the appointed time. The fifth rider was late and I was grateful that the others waited 10 minutes for me. To atone for my sin, I “volunteered” to write the report. My excuse was that, knowing I had a slow puncture in the rear tyre I decided to add a little more air. As I was putting the pump away a loud bang indicated that my “slow” puncture had become “fast” necessitating an inner tube change!!

We set off in good spirits along Madeira Drive. Anne, wisely, switched us to the clifftop cycle path at the Marina, the tide was in and there was a strong onshore wind. Once on the clifftop and with the wind behind us we made rapid progress to our coffee stop at the Gateway Café. Over coffee we discussed the complications of restoring traditional habitats and specifically what does “traditional” mean should the South Downs be restored to Forests??? 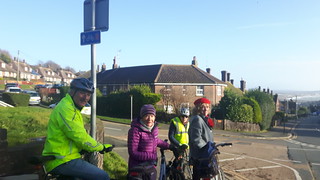 After coffee we followed the NCN Route 2 to Newhaven much enjoying the down hill section to the river and arrived at The Ark for a welcome but briefish and enjoyable lunch. At this time of year, we were all aware of fading light and that it can get a bit chilly in the afternoon. Over lunch Angela kindly shared her maps with me as I was proposing to complete the ride to Berwick on my own.

Again, with the wind behind us Seaford seafront was soon reached, as we cycled along we could see Tide Mills in the distance. On a warmer spring or summer’s day a diversion to the old village and a coastal ride into Seaford would be appealing.

Halfway along the seafront Anne, Doris and Angela turned inland and headed for the Railway Station. Prudence made a last minute decision to join me on the final leg to Berwick. As we turned off the seafront to follow the NCN route 2 we were sheltered from the wind and the sun made an attempt to shine. 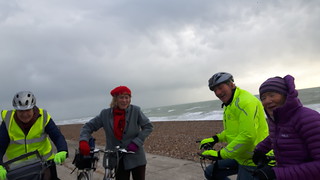 Approached Cuckmere Haven be decided not to follow the route across the fields but to use a short length of the A259. Fortunately, the road was not very busy and the light was still good.

Back on the country lanes we followed the cycle route to Berwick reassuringly spotting the landmarks, landmarks Angela had referred to over lunch. We arrived at Berwick and having just missed a train, retired to the Pub for a well-earned coffee before catching the next train.

My thanks to Anne for leading the ride and Angela for her help with the navigation. As I will be away for the New Year I will not be able to join you on the 2nd so can I take this opportunity to wish you all a very happy New Year.

This entry was posted on Friday, December 13th, 2019 at 5:55 pm and is filed under Ride report. You can follow any responses to this entry through the RSS 2.0 feed. You can leave a response, or trackback from your own site.