‘We have the right of way here too, you idiot!’, I yelled as the car accelerated
away from us. Sikka joined me in admonishing the unpleasant 4×4 driver,
who had stopped briefly to tell us why he thought roads were for car drivers
only. The unhinged motorist may not have heard our disapproving shouts
as he sped away, but yelling at this narrow-minded fool was certainly
therapeutic for us.

We were relieved to find that the example of car driver road rage was an isolated incident in an otherwise blissful 18-mile cycle ride from Hassocks station for lunch in Lewes, on a mild day in January. As well as ride leaders Tessa & Sikka, it was Angela D, Angela C, Joyce, John, Doris, David & Nick who comprised the Clarionista nine for Sunday’s ride.

It was a short cycle ride of only a few miles to the coffee stop at the Plough Inn, which opened at noon. We arrived a few minutes before midday, so had time to sample the vegan biscuits Tessa & Sikka had generously brought along to share with us.

Although I had visited the Plough Inn before, I’m not sure I had ever ventured inside. The pub decor consisted of a spitfire & biplane hanging from the ceiling, motorbike illustrations, a bus stop sign and pop music ephemera from the 1970s (Bob Marley, The Clash & Marc Bolan). I was particularly interested in the Marc Bolan ‘Say it loud’ promotional poster for the NME (circa 1970?) displayed on the wall. 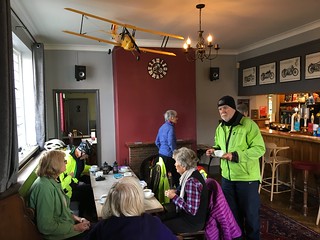 As we drank our coffee, the room was warmed up by a blazing coal fire next to the table we were sitting at. The pub jukebox treated us to a UB40 track (So Here I Am), followed by St Etienne’s version of Neil Young’s ‘Only Love Can Break Your Heart.’ I thought the coffee we were drinking was a little weak, so appreciated Frankie Valentine’s lively syncopated electro Latin grooves (identified by Shazam as the track ‘Spanish Dance’) to help us get in the mood for the ride to Lewes for lunch.

Tessa was right to warn us of the badly cracked concrete path which formed part of the route to Lewes. Recent heavy rain had left the path waterlogged in places and was potentially treacherous for cyclists. We all concluded that walking our bikes along the disintegrating path was the best approach, even if we had to cope with wet feet when walking through the occasionally deep puddles of water.

The route to Lewes was fairly straightforward (via Cooksbridge & part of the A275). Although Tessa & Sikka said they had cycled it many times, it was all new to me. I think I counted only one or two steepish hills we had to cycle up, which is quite rare in East Sussex.

Crossing the River Ouse towards Lewes, it didn’t take long for the familiar Harvey’s Brewery building to appear. Our lunch stop (and ride end) was across the road from the brewery in the John Harvey Tavern. I had visited this pub for the first time earlier in the week and sampled what I thought was an alcohol free beer for Dry January. Their ‘low alcohol’ beers do actually contain some alcohol, so I opted for a pint of lime & soda this time. 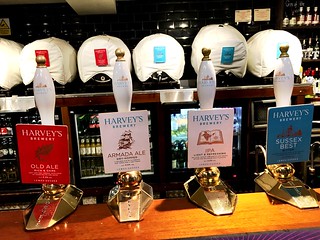 I had a bag of chilli peanuts to accompany my pint of lime & soda for my Dry January/Veganuary lunchtime experience. Most of the other Clarion cyclists had a more substantial meal though. Joyce’s vegetable curry option looked particularly appealing.

The CND t-shirt I was wearing prompted Joyce to recall the anti nuclear demo she went to outside Faslane nuclear submarine base in Scotland a few years ago. Other topics discussed over lunch included the inevitability of Scottish independence, HS2 and how we all hoped to be flying around with jet packs very soon.

Thanks to Tessa & Sikka for an efficiently organised cycle ride with plenty of memorable moments. None of us got lost either, which must be a Clarion first!

This entry was posted on Friday, January 17th, 2020 at 11:55 pm and is filed under Ride report. You can follow any responses to this entry through the RSS 2.0 feed. You can leave a response, or trackback from your own site.