The chalice of the Xmas Lunch was handed to Sean from Wendy & he rose to the challenge, picking ”The Walrus” on what turned out to be  a wet & windy day, though warmer than previous seasonal celebrations, organised by Jim, Angela, Jenny & me. 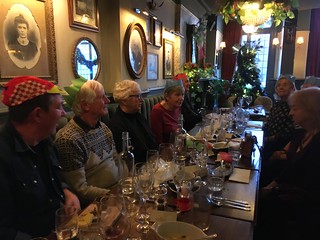 Wetter & blighted by Brexit, which we all deplored & by Labour losing the disastrous December 12th General Election & Friday 13th living up to [down to] its reputation as a very dark day.

12  of us made it to the table on top floor of the rambling Walrus, in its Xmas decor. There are some super snaps on Flickr of all of us & most of the tasty food.  Sean, Mick & I had chosen the mysterious ”verinne ”-mainly out of curiosity- salmon eggs atop smoked & steamed salmon mousse atop cucumber & watercress jelly.  Neither Sean, nor I ,got through to the jelly, as both had tender tummies & none had spoons, but Mick did & was underwhelmed by the bottom. Would have been easier to reach its depths with a spoon, but too tricky with knife & fork

Next course was light & juicy-cod with samphire, mussel[s] & potatoes which looked like scallops but were even nicer [especially for tender tums.]   Traditional turkey & vegan options were provided but I was surrounded by fish eaters.& we were all charmed by the dish.

By dessert course my tum was delighted to receive both a chocolate tart & a plum & vanilla cheesecake-having agreed to go halves with Mick.  Joyce got her vegan custard for a not very fruity crumble &  Angela D. said custard better than the traditional Xmas pud proffered. Sean’s cheese & biscuits looked pretty & he told me charcoal biscuits were good for the blood, so I’ve been chomping on the ones I bought recently from Lidl wondering why they were black & thinking maybe ”having coal for Christmas”.

Angela Coulter challenged us to say what was our favourite Clarion Ride of 2019  & I plumped for the Ride for Leon, organised by Joyce, David Jezeph & John Clinton.  Fred said he’d missed Joyce’s speech but Joyce replied that it hadn’t really been a speech, more happy recollections of wonderful times together with Clarion & others had chipped in. She mentioned the photos she’d chosen for the grave & the frames that they found in India on their trip there together.  She told us about her time working in France  for UNESCO & about French pensions[in the news again as Macron tries to”reform”] & the better childcare facilities there.

I thanked her for pointing out to us all the Interegs money that EU gives us for  benefits to the environment-such as Cuckoo Trail/Avenue Vert & NCN linking Channel Ports.  All saddened that most people don’t seem to have known ”what the EU ever does for us”.   Misled by Boris’s lies we’re now at the mercy of US Vulture Capitalism. Shame that John Pilger’s documentary on NHS was suppressed until after the General Election. Scales may have fallen from some voters eyes, had they seen that before the vote.

Ian thanked Sean for organising the event , at short notice,  & to everyone’s acclaim & enjoyment.  Mick & I were the only Clarionistas to cycle there, I think, &  had the strong West wind to push us home, before more winter storms began.   Angela Devas had encouraged us to join  her ride from Hove Park on the next day & we did, when it was sunny & bright all day long

Shortest Day over but Burning of the Clocks must have been  a washout on  21st, whereas our Christmas Beano  was jolly good fun..  Thanks to Sean for organising & for turning up on the day, since he’d been out late in London on night before & trains were disrupted by.floods, in spite of engineering works having been carried out to prevent floods to tunnels.  The election disaster can only make climate chaos worse as Tories plan to build more roads & more concretisation , whereas Labour had an ”oven-ready” Green New Deal” which FoE  applauded.    Hope the New Year heals some wounds  & that all have a healthy, happy Yule etc.      See you all on the annual Carrats Cafe Ride on Jan 2nd.

There was Tessa and Sikka. There was David and Fred. There was Ian and Anne and Suzanne. There was John and Ian with Mick and Nick and last but not least Roger and Joyce. There were old bikes and new bikes, helmets and headscarves, socks and cycle clips. 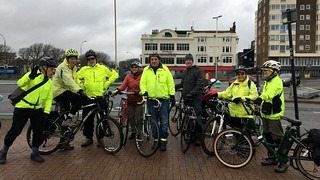 There was cycling from Palace Pier to Carat’s Café. There was a wardrobes-worth of (peaceful and peaceable) yellow jackets. There was a stiff sou’wester but the rain didn’t date put in an appearance.

There was laughter and chat and debate: politics, personalities, planning, postulations and even some expostulation of the very best kind … that between friends.

A lovely way to start the New Year and thanks to Ian for getting all 13 of us together. Obviously 13 is now our lucky number.

This entry was posted on Friday, January 17th, 2020 at 11:47 pm and is filed under Ride report. You can follow any responses to this entry through the RSS 2.0 feed. You can leave a response, or trackback from your own site.