International Women’s Day 2020 found Joyce, Angela, Sally, Doris, John, Jim & Nick at Brighton station waiting for a train to Lewes for the day’s bike ride to Berwick. The 20 mile linear route included plenty of daffodils and only a little rain.

Jim had devised a route which avoided any steep hills when leaving Lewes. After looking at some impressive graffiti, reminding us of the potential imminent extinction of the Blue Spix Macaw, we cycled through the town centre and turned left to follow the river Ouse past Harvey’s Brewery. It was then a short cycle ride to the morning’s coffee stop at the Ringmer Cafe.

While the other Clarionistas drank coffee, I attempted some emergency bike maintenance and removed a rubbing brake block. The coffee break was also an opportunity to take in the first daffodil moment of the day.

The route from the coffee stop to lunch at the King’s Head was perfect for cycling. We all agreed with Joyce that we enjoyed the long, straight, car-free B-road, which took us most of the way to our lunchtime meal of crisps & chips (the Mediterranean vegetable tart looked good too). Jim provided us with a copy of XR’s latest Hourglass paper to read while we waited for the chips to be served. 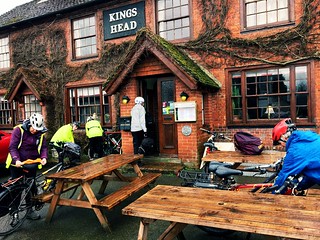 Interesting signage has featured on quite a few Clarion rides. There were three particularly intriguing signs on Sunday’s ride, which were worth reading and photographing.

The punctuation on the ‘Very Slow. Cats!!!’ warning sign to motorists had been amended to give the impression there were some very slow cats wandering through the village. We also passed a sign which marked the graves of two soldiers who had died in a dual ‘circa 1800’. The third sign of note was the ‘Warning – Dogs Running Free’ attached next to a ‘Keep Out’ sign on a barbed wire gate outside the High Cross estate of violent thug Nicholas Van Hoogstraten. 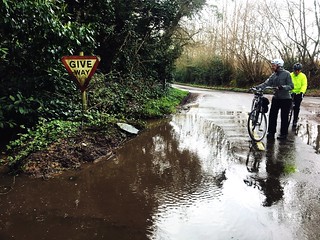 Most of the day’s rain had coincided with a 20 minute cycle ride to the pub lunch stop. The afternoon weather was dry and cool and it didn’t take too long to reach Berwick station, following some useful amendments to Jim’s route from Angela. We were slightly annoyed to have just missed the return train to Brighton, but it’s good to know that the Berwick Inn always seems open for people like us who have just missed trains. 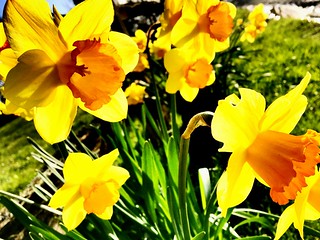 An excellent day of interesting signage, daffodils, chips & cycling. Thanks to Jim & Angela for pointing us in the right direction.

As yet we have no details of the ‘Next Ride’ which I understand (from an email from Jim) will be a ‘mystery’ one ‘facilitated by Angela D”. In the nature of things you can’t have details of a mystery ride without defeating the whole object, but participants will need to know when to meet at Brighton station or wherever the starting point is. I’ll let you have these vital bits of info as soon as Angela has had a chance to work out where she intends to take the ride and the when and where of the starting point.

Section Report for Boots and Spurs.

We had a really excellent report in the much delayed last issue and Joyce has volunteered to do a new one for the next Boots and Spurs which I feel sure will be equally interesting and reflect our activities in the latter part of last year really vividly.

You’ve probably seen Jim’s message about this on via the google group. Of course we used the southern bit of the Way as a means of getting out of Chichester on our Dell Quay rides which became a favourite with Julian. But early on we also had a ride that started on the Way and broke for lunch at the excellently- named The Fox Goes Free at Charlton. We didn’t do this one more than once or twice because of having to use a rather dangerous bit of the A286 for the last bit of the outward journey. But it may now soon be possible to think about reviving something like this.

It has become evident during the last week that going ahead with our plans to hold our AGM on 25 March was not such a good idea.  But I didn’t want to take a unilateral decision to postpone without consulting anyone – perhaps it was just me that was having serious doubts.  So first I got in touch with Anne and Mick who were going to host the meeting.  Mick replied quickly saying ‘‘I am getting more and more convinced that non-essential meetings in confined spaces are not a good idea for people of our age profile.’  Then I sent a message to our various office-holders, quoting Mick’s response and asking whether we should postpone the AGM. The replies were unanimous that we should.
So we will postpone the AGM until such times as it seems safe to go ahead.  There were no really urgent decisions to be taken.  At some point we will have to take a decision about he 2021 local subscription (the national one is staying the same) but there’s plenty of time to do that.
Sorry to have to send out a message like this – but I hope you’ll agree that it’s the sensible thing to do.