Those smart enough to look at the weather forecast for Sunday had already made their apologies and didn’t turn up for Dave’s Portslade ride. When I arrived at Portslade station, Dave said he had considered cancelling when he saw the predicted wind and rain weather conditions for the day.

It had indeed started to rain, but we both agreed that it would be good to attempt some sort of cycle ride. We took a route towards Devil’s Dyke, which was familiar to me from the recent BHT bike ride.

When the torrential rain persisted, and the puddles at the side of the road we were cycling on turned into mini floods, we decided to abandon the ride. It was outside Dyke Road’s Hilltop Cafe where we headed back to Brighton, after a 10-mile ride in distinctly unappealing weather. 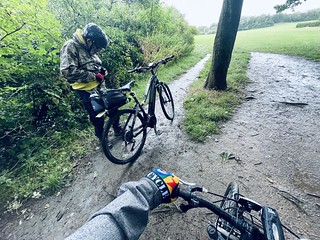 Although it’s likely climate change will produce similar extreme weather in the future, it would be good to have another attempt at Dave’s Portslade ride in drier conditions.