It was a chilly and overcast January Sunday morning when we gathered for Jim’s ride in Preston Park.  Although Jim turned up, he didn’t feel well enough to participate in any cycling activity. He assured us that his flu-like symptoms weren’t Covid-related and briefed me with details of the proposed route. We were left with directions in writing and a photocopied map, which proved to be very helpful as we attempted to navigate our way to the lunchtime pub stop in Hurstpierpoint. 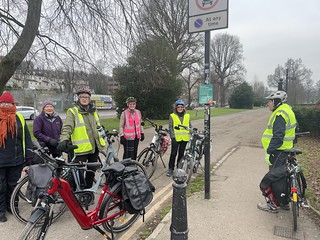 Angela D, Nick, Doris, Sarah, Dave, Tessa, Wendy T & Brigiite were the eight cyclists who took part in the ride. A particular welcome to Sarah & Brigitte, who were cycling with us for the first time.
Angela and myself were the only ones in the group with conventional pedal bikes. I think this was the most e-bikes I’ve seen on a Clarion outing. I did rather envy those who didn’t have to peddle up the steep hill leaving Preston Park. Tessa identified one of the drawbacks of e-bikes just before we were about to enter Stanmer Woods, when she realised that her bike didn’t have enough battery charge to complete the ride and decided it was best if she headed home. After saying farewell to Tessa, we headed
In Stanmer Woods we came across a large group of off-road cyclists, who all had e-bikes. I hadn’t realised that e-bikes could be used in that way. Perhaps Clarionistas with e-bikes could fit wider tyres and give the off-road cycling experience a go in Stanmer Woods next time? Off-roading on an e-bike certainly looked like fun.
The cold weather meant there was no interest from anyone in buying an ice cream from the van in Ditchling Beacon car park. The lunch stop in Hurstpierpoint wasn’t far away, where it was assumed there might be some warm food available. After descending Ditchling Beacon, we passed Clayton train tunnel and the Children of the Fair statues in Hurstpierpoint before reaching the Horse Inn lunch stop. 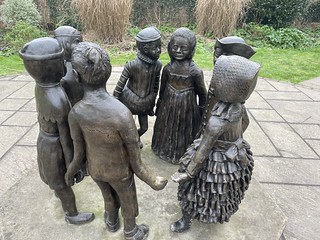 There was a mixup with a food order and a delay in preparing my bowl of Horse Inn chips, which meant our lunch break was longer than expected.  We had time to discuss selfish motorists parking on pavements, and a few other important topics, during this longer than usual lunch break. Jim’s ride route after lunch was supposed to go via Devil’s Dyke and end up in Hove Park, but it was decided that we all wanted to take a faster route back to Brighton. The cycle track alongside the Brighton Road dual carriageway is noisy and not particularly pleasant, but it did mean we were back in Brighton by just after 3pm.
As we left the Horse Inn, we finally caught up with Dave, who had spent a shortened lunch break in a bus shelter. He had missed us at the start of the ride and was the only one of the group who decided to take the Devil’s Dyke route back to Brighton. I would also have taken the Devil’s Dyke route if the day had been longer and slightly less chilly.Thanks to Jim for a great winter ride. Thanks also to his excellent directions, which enabled us to complete the ride without him being there.
Ride report by Nick

This entry was posted on Thursday, February 3rd, 2022 at 10:25 pm and is filed under Ride report. You can follow any responses to this entry through the RSS 2.0 feed. You can leave a response, or trackback from your own site.