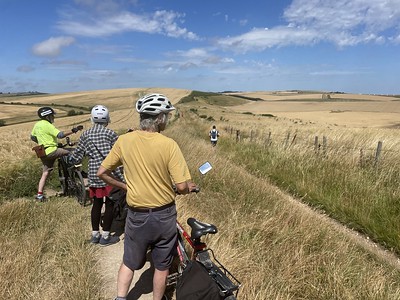 Unfortunately your writer is still suffering from shock which is why this report has been delayed. What was witnessed on this ride has forced me into the arms of the Moral Rearmament Society, and indeed led me to the shrine of the late Mrs Mary Whitehouse. Gentle readers, please be warned; those of a nervous disposition might wish to stop now.

As I disembarked from the train at Shoreham, other joyful Clarionistas, also on the train but in another compartment, gathered round. One member (unnamed for obvious reasons, and because of a lively fear of libel laws) was adorned in the Clarion tenue but . . .(and here I may have to have a little lie-down)…this was open to the waist. Mercifully we were spared chest hairs and a gold medallion, but even so, you will all agree, that even with the strongest sunglasses, this was not a sight to behold.

Our indefatigable leader Dave C met us at the toll bridge in Shoreham and was soon leading us up a particularly precipitous path, charging ahead (literally – he had the advantage of a powerful electric bicycle) and looking back from time to time at the dismal progress of other Clarionistas. I do not think our leader saw the need for quite so many multiple stopping opportunities en route, where such excuses as butterfly watching, sneezing, catching up on some particularly useful piece of local news, falling off, falling on, steering problems and turning round to admire the view and then falling off again, were liberally proclaimed as valid reasons for a long and welcome pause. 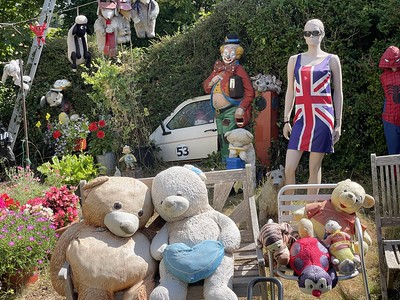 There were some pleasant downhills; my enjoyment of these was marred by a thoughtless and inaccurate description of me ‘hurtling’; in fact, of course it was a daring and gracious descent at speed.

We all gathered at the first escape opportunity thoughtfully outlined by our leader. I think this was meant to be an example of excellent ride planning, rather than an excuse for an early departure from the tortuous off-road expedition that we had found ourselves on. 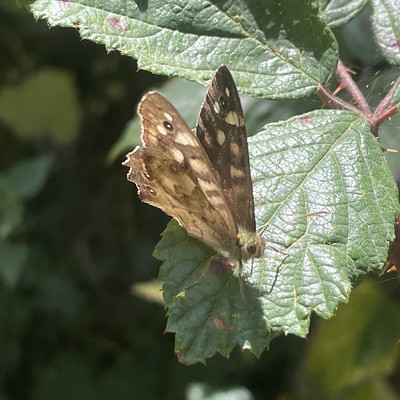 To recover from all these adversities, we found ourselves in the beautiful Coombes church where even the chattiest Clarionista (some have wrongly accused me of this excess) were silenced by the peace and beauty. We then decamped to St Botolph’s not for a further dose of religious revival but for tea and cake in the graveyard. 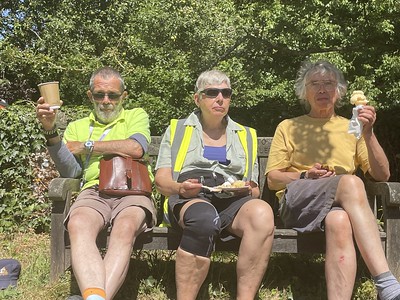 We then propelled ourselves in a homeward direction, having been left apparently leaderless by Dave’s unspecified mission in Steyning, our original destination. Alan-from-London continued to look bemused by the curious goings-on of Brighton and Hove Clarion and he was understandably anxious to re-join his London group, rumoured to be meeting in Lancing chapel. However, your writer was unable to make this foray, too exhausted by her earlier shocked discoveries of Clarion depravity. 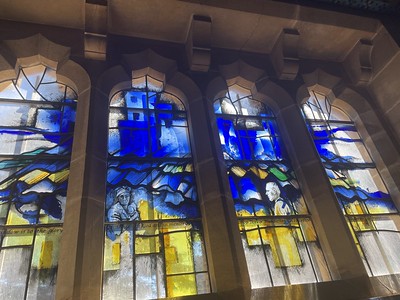 A tribute to anti-apartheid campaigner Trevor Huddleston at the chapel

Many thanks to Dave C for leading this ride and to all the other Clarionistas for being such good company. 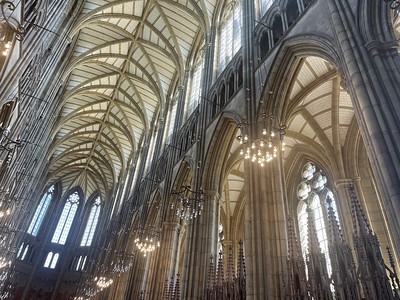 This entry was posted on Thursday, July 28th, 2022 at 6:43 pm and is filed under Ride report. You can follow any responses to this entry through the RSS 2.0 feed. You can leave a response, or trackback from your own site.