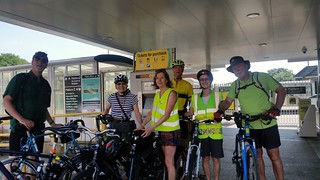 Present on the ride were leader Leon, Joyce, Wendy David Sikka and Richard. A well prepared and clearly experienced Leon led us for about an hour and a half from Hassocks station over gently undulating roads in brilliant sunshine via pretty Sussex villages like Albourne and Hurstpierpoint to our lunch stop at Woods Mill Nature Reserve. 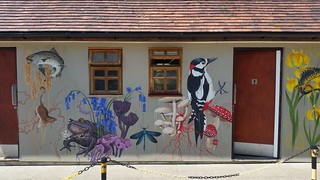 A leisurely picnic in the shade of ancient oaks was followed by a short stroll to the nearby mill lake, sadly now lacking water movement and covered in algae but still a lovely tranquil spot with damsel flies in profusion. It was time to follow the butterflies, including slightly elusive but gorgeous Red Admirals, so some of lost ourselves in that blissful and innocent activity for a while.

Refreshed, we set off again towards Bramber. Sikka and David left us for a while to investigate a possible future ride (watch the Clarion site). Cars, and sweating young men hunched over the handlebars, shot past in both directions from time to time. The author wishes them no ill but fancies we enjoyed our ride somewhat more. 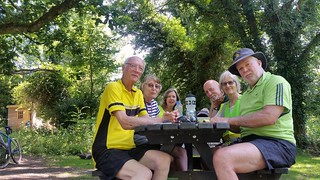 Outside Bramber Castle entrance we regrouped and availed ourselves of David’s knowledge of a newer and alternative route to the Adur on a pristine cycleway, flanked by fields in which the grass grew tall. Soon the wide river came into view, which we crossed, and passing through the ancient Salts parishes of yesteryear found ourselves on the eastern bank on the old railway track. Back then through the northern suburbs of Shoreham, where David took his leave, and beneath the railway bridge at Southwick to Shoreham Lock.

Glancing idly down at the collection of Sunday boaters waiting for the lock gates – all amateur maritime life is to be observed there – the party unanimously decided that a swim was irresistible. The water temperature was perfect for cooling off after twenty miles or so of midsummer cycling and a certain stoniness of beach did not discourage us. The author learned that Lycra cycling shorts and tiny pebbles are unfortunately inseparable, and that this does not increase saddle comfort. No matter. Suitably cooled we headed off to take tea in a suburban garden in Hove. Apple and blackberry cake, muesli bars and fresh strawberries were thoughtfully provided by Wendy and Sikka. 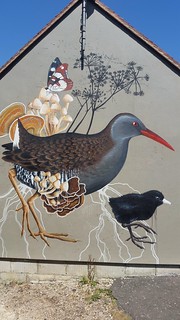 The author hopes that our predecessors of 1893 are looking down on us benevolently and feeling that our summer idylls are not so impossibly different from theirs. Thanks again to Leon, without whom…

EXTRA! a video from Leon: https://flic.kr/p/WpyzXh 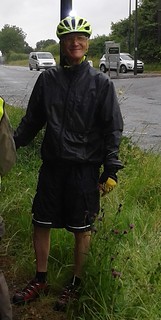 Our leader, complete with flashing helmet!

The ride started at the Velo Cafe on The Level with Dave, Ian, Joyce, Julian, Kate, Leon, Lucas, Rob (H) and Sikka-Sue passing on the south side of St. Bartholomew’s picking up the NCN20 and continuing north along the side of Preston Road.  But at Preston Park, Ian’s bike gave trouble, that neither he nor Rob could fix and so he returned home.  Along the London Road, by the mini-Sainsbury’s, Jim joined. 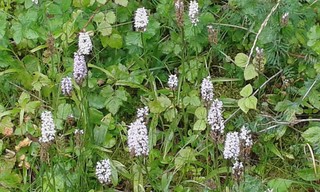 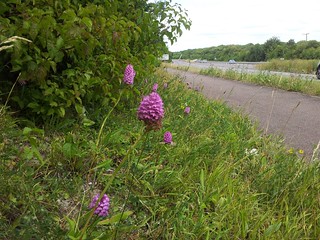 At the Mill Road roundabout on the London Road, we turned left briefly up Mill Road and right passing under the A27 into Waterhall Road and onto the track on the west side of the very noisy A23 right up to the Pyecombe filling station. It had begun to rain appropriately at Waterhall, but then held off until after a short stretch west on the A281 over the roundabout and south down through Poynings past the church. The headwind and rain continued on the undulating road through Fulking and Edburton (and the steepest hill), along a short stretch of the A2037 which was then crossed onto a snaking bridleway going through one normal gate, quickly followed by a gate so narrow that bikes had to be lifted vertically to clear the handlebars and get through. 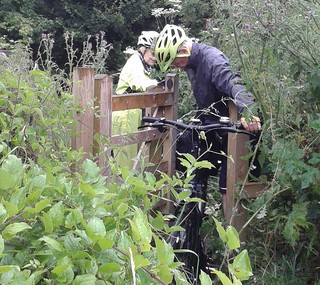 The Awkward Gate – the vertical post had seemingly been inserted just to make life hard for cyclists!

Soon we came to Smugglers Lane, heading NW before turning south through Upper Beeding to The Rising Sun Inn for lunch. 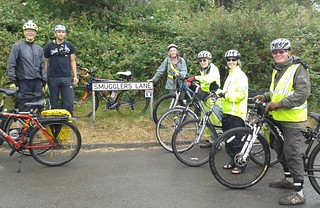 The Sunday menu only extended to two meat and one nut roasts, but luckily the vegetarians could chose the nut roast. Their helpings were enormous and four of us made up a complete plate donated to Jim who had got to the bar just after the nut roasts had run out. 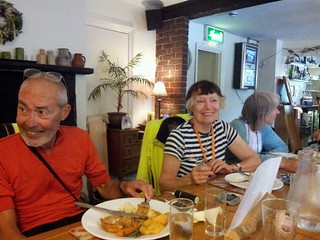 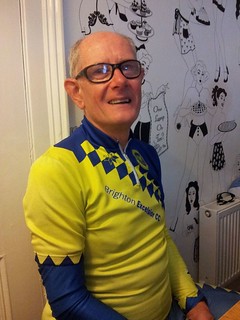 Bob Harber popped into the pub to say hello over a pint.

After the leisurely lunch we set off on the minor road west through Bramber, with light rain for a short while, and then south onto the Downs Link, where just north of Botolph’s Church, Joyce, Leon and Lucas chose to go on the Coombes Road, while Dave, Jim, Julian, Kate, Rob and Sikka continued on the Downs Link on the east side of the River Adur, and we all joined up again by the renovated wooden Old Shoreham Bridge, that replaced the former Toll Bridge.  Dave could remember paying sixpence to cross this bridge when it was on the main road before the A27 bridge was constructed to its north, which in turn has affected the river flow here, he explained.

At the Shoreham Station Kate and Jim took the train, and the rest of us joined the NCN2 towards the harbour, while at Southwick Park Dave left for home. At the start of the Monarch’s Way Lucas continued on, and in Carat’s Cafe Joyce, Julian, Leon, Rob and Sikka indulged in coffees and cakes. The tail wind along the final stretch towards Hove was strong enough to speed us with little effort on the pedals. At Grand Avenue Julian turned north arriving home at 4.30 pm having covered 26.5 miles in all, while the others headed on towards the Brighton Pier.

For some time we have been looking for a ride from Shoreham to facilitate Clarion members living locally in West Sussex, and originally planned a gentle ride to complete Jenny’s ride to Bramber on 23 February, which was shortened due to gusty winds. To enliven the ride, we have tried to add an extra loop along Spithandle Lane to Wiston Granary and back along Mouse Lane, but getting access through the grounds of Wiston House on the day cannot be guaranteed, and returning to Steyning on the busy A283 would be too dangerous. So we have come up with a more challenging ride that Jim would say includes ‘some undulations’.

We will start at Shoreham Station and feed our way through the quiet streets of the historic village of Southwick (recorded in the Domesday Book) and on to Portslade, before turning northwards towards Benfield Valley Golf Course and arriving in Hangleton at the start of the Dyke Railway Trail – RCN 82.

For those who want to check the state of their knees and lungs on an ‘undulation’, before embarking on the 564ft climb to the top of Devil’s Dyke, you can try the short-cut from Hangleton Valley Drive up Downsview to meet up at St. Helen’s Church. In fact railway grades are seldom steeper than 1 in 40, so this smooth-surfaced trail is quite gentle, as we climb up between West Hove and Brighton and Hove Golf Courses and pass the Dyke Clubhouse. From hereon it is almost downhill all the way back to Shoreham, as we zip down Saddlescombe Road passing views to Devil’s Dyke before arriving at our lunch stop at Poynings. We don’t have many opportunities for a coffee break, but if there is time, we can pop into the Hiker’s Rest at Saddlescombe Farm before making the final leisurely ride to the Royal Oak for our lunch stop.

After this break, we head west along the foot of the Downs through Fulking and Edburton and pass Tottington Manor Farm before joining the A2037 from Henfield. There is an extant bridleway that could take us into the back of Upper Beeding, thus avoiding this busy road, but unfortunately some trees have been felled that block the route and it has now become overgrown and it is only really passable by foot. Therefore it seems that we have no option but to cycle carefully down the stretch of the Henfield Road into Castle Town and Bramber. If you blink you might miss Upper Beeding, but they do have nice beer, food and a large garden at the King’s Head.

The last leg follows the River Adur southwards along the Downs Link and across the Tollbridge to Shoreham Airport where we can take another break before continuing along the river through Ropetackle and back to Shoreham Station. If you are feeling fit and need a longer ride, you could cycle into Shoreham from Brighton and back (allow an extra 45 minutes each way).

Duration: About 6 hours including lunch and tea stops.

Terrain: Quiet roads and smooth off-road to RCN 82, apart from two short lengths of B roads through Portslade; hard surface, gentle climb to the Dyke and steep downhill to Poynings (check brakepads); one short climb on Edburton Road; half mile of busy road on A2037; flat, off-road Downs Link following river meanders.

We will cycle slowly uphill through residential roads in Hangleton and onto the cycle track on the dismantled railway line which joins the Devils Dyke road. Continuing towards the Dyke, we then have a long downhill run alongside the Dyke itself, past Saddlescombe, and turn left through Poynings and Fulking, a softly undulating road at the foot of the Downs, then on through Upper Beeding to Bramber for lunch at The Bridge Inn.

I suggest we stop for coffee either at the Dyke Road Inn or the delightful Hikers Rest café at Saddlescombe where they do homemade cakes with wheat-free options. This will be dependent on weather as the Hikers Rest is outdoors (within a walled courtyard with a covered area also open to the yard).

We head back along the Downs Link to Shoreham (or deserting the Link and detouring along Coombe Lane past St Botolphs if the ground is soggy). There’s the possibility of tea at the airport if desired, and the option of cycling back to Brighton or taking the train from Shoreham.

Faster uphill option: I am expecting to take the long hill from Brighton up to the top of the Downs slowly, but if anyone wants to cycle by an alternative route, or faster, up to the Dyke, let me know. We can arrange to meet them, e.g. at the coffee stop which is most likely to be at Devil’s Dyke Inn (my phone: 07787 402 229).

Hope to see you there.