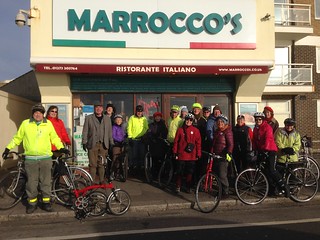 There was Jenny and Leon, Chris, Roger and Sue
Charlotte, Kate, Julian, Joyce, Linda too.
There was Mick and Mick S, Joyce and Suzanne
Sue, Fred and Richard who chatted with Anne
With the red berets of Prudence and Julia
There you have our band all peculiar:
Twenty tough riders all wrapped up warm
That’s how to start the year – with a Clarion swarm.

But seriously, folks, thanks to Ian B for leading the ride, and it was great to see Sue B when we got to Carats. Chris from Lewes, resplendent in his Edwardian tweed jacket and matching waistcoat, suffered a puncture which proved too tricky to mend but luckily he was able to rejoin us later in the morning.

Tales of rides all over Europe and into deepest Hove were discussed as well as a myriad of other topics as is the Clarion wont. 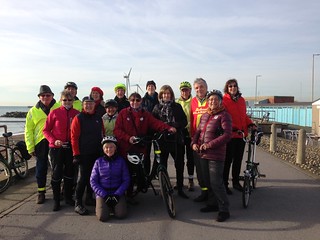 Never have so many been photographed by so many. Flickr will be awash, so don’t forget to look at the Clarion Flickr site.

The Next Ride : Saturday 2 January 2015 Our Traditional Brunch Ride

TO CARAT’S CAFÉ AT SHOREHAM HARBOUR

After the experience of the last two years the preference of nearly everyone seems to have the ride on 2nd rather than than the  1st. The poll I conducted last year was decisive and I can’t imagine that preferences have changed in 12 months As always, I’m hoping that this easiest of starts to the year may tempt out some of those we seldom see – or even have yet to see.  Since Carats is likely to be a might less busy than on New Year’s Day I’ve made the start time half an hour later than in the old days.

Do check your emails on New Year’s day – after 5 pm just in case.

First sunny day for what seems like the whole of December saw 16 of us lunching at Carat’s Café, with Ian, Jenny, Leon, Fred, Mick, then Joyce & me, arriving at the Palace Pier simultaneously from opposite directions. Ian took off as soon as we two arrived a minute or two late, for the promised “prompt start”. No time for a photo then as there were people waiting for us at Marocco’s & hordes heading out to Carat’s & capturing all the tables! *  Sean & Jane soon joined us, having come by train from the east, as Leon had from the north, though Jenny had cycled all the way from Cooksbridge. Linda had cycled from Lancing & was at Marocco’s, along with Tessa’s party of Marilyn, Sue P & Sue S. Richard had cycled from his new home in Hove & Fred took a group photo, standing in the road. Some were looking perkier than last year & some were looking peakier, as winter bugs took their toll.

Fred had his new electric bike & soared past everyone, while Sean, Jane and I chatted at the rear about Xmas & socialism. Sue B was at the café, along with crowds queuing & sitting around outside. I had all my winter thermals on & couldn’t bear to sit inside the steamy café, so awaited the arrival of my scrambled eggs at a table outside, but near the door. As soon as food arrived, I carried it down the steps to the beach & ate it on some rocks. There was a family with a dog which was partial to scrambled eggs too & he tried to share mine. I was quite willing to, but the owners took him away, saying he’d probably scoff it all. As I went to take the plate back in, I saw Richard sitting in the sunshine by the newly opened drinks counter. He said he’d made the mistake of queuing there & it had taken ages. Cups of tea were treasured commodities all along the sea-front, with huge queues at the several open-air venues. Never seen so many people flocking to the sea-front & liberated from the dreary, wet days we’d endured over the Xmas holidays. Fred came out to join us & snap our food & I suggested we try to take some group pics on the beach by the foamy sea.

Some were still reluctant to take to the beach, but when I said I’d a towel, Tessa, Mick, Marilyn & Sue P all had a paddle in the splashy waves. As I waited for the 5th & last person to use my tiny, old towel, I found out that Tessa, Sue P & Marilyn were heading west, as Marilyn had moved to Shoreham Beach. It was a shame that Linda had already left for the west, but, hopefully, Marilyn will be joining David & Linda & heading out together in 2013 to join our rides.

Thanks to Ian for organising, to everyone who came & to Clarion for 2012 rides & hopes of more in 2013. Let’s hope they are all as sunny as this one was.

The Next Ride: 1 January 2013 – to Carat’s Café at Shoreham Harbour

The next real ride will be on 13 January but there will, as usual be

TO CARAT’S CAFÉ AT SHOREHAM HARBOUR

Carat’s is a popular venue on New Year’s Day and it’s not possible to book…   We’ve been lucky in the past – partly because we’ve managed to get there before the rush And once  (2007) we even sat outside – not bad for January. Like last year we’ll start 10 15 to give us a better chance.  Prompt start please.

As always, I’m hoping that this easiest of starts to the year may tempt out some of those we seldom see – or even have yet to see.

Meet by the Palace Pier at 10.15am – or along the route at eg Maroccos.  Only about 9 miles (there and back) – plus from home to the Pier.

Having spent most of the festive season cooped up with Mick who was cancelling conviviality because of a lousy cough & cold, it was a treat to mount our bikes & coast down Dukes Mound & along the cycle track to the Palace Pier. Although it was an earlier than usual start for the annual Carats Café NYD ride due to fear of crowds & queues at the counter, Ian, Joyce & Leon were already at the pier & we made a swift start at 10.15. We noticed some festive broken glass on the bike track.

There was no stopping at the customary Maroccos Café pick-up point for Tessa or other Hovians, but Jenny had joined us before the West Pier ruins but after the beautiful, restored bandstand, as we headed into the south-westerly wind, hoping that the spray was from the sea, as the sky looked fair [sometimes]. There had been a few brief glimpses of sunshine & it wasn’t very cold. However, colds were definitely in the air. Sue had had it over Xmas & now Ian was in the thick of it, whereas Mick, heading out in front, seemed glad to be able to breathe again, after nearly 2 weeks of catarrh, nosebleeds & constant coughing.

Ian was feeling really weak and washed out as we wheeled westward & was pleased to see Sue glide by in the car which he vowed would carry him home, rather than the tail-wind . As soon as we reached the café car-park he was dismantling his bike & packing it in the boot. Earlier arrivals had found us a table & joined the queue. I could see sunshine outside & I was warm from the exercise so left the rest to try to take some photos through the glass. That didn’t work so I shot the beach & a solitary dog walker, until Jim arrived from the lock side, having taken the high road while we tak the low.

No food photos as Fred was absent, though with fellow clarionettes in London, I think. Plans for the April Bristol to Bath trip & the need to book were raised. Joyce & Ian, who was now looking more comfortable, discussed our forthcoming AGM, Jim & I discussed his more undulating route to the café & it’s proximity to the NCN 82 to Devils Dyke, where I’d had my accident in June. Leon told us how he’d lost a stone in 2 months & Jenny told him he needed to start back on the carbs now. Jenny was wearing her night rider cycling top & regaled us with tales of long trips in the dark, though Leon wasn’t convinced & referred to recent local cyclist’s smash with young drivers at night on the very quiet Underhill Lane, where the car must have been going too fast & the cyclist ended up with severe head injuries.

Looking out the windows we then saw that it was really raining but, we’re not made of sugar so won’t melt, as the Danes or Dutch say, & now there’s a tailwind home. John & Jo text us all Happy New Year as we left. I stopped to photo the dozen or so surfers who were enjoying the rough sea, but not managing to mount the waves. I was starting to envy their wet suits, as wasn’t prepared for weather. Now pelted along to try & catch up, but, oh no, Mick has a puncture by the lagoon & 3or 4 clarionettes cluster round & assist. Jenny had 2 spare inner tubes and a brilliant new pump so she helped Mick & we encouraged the others to go on homeward out of the rain. We three then decamped to a small sheltered garage porch to change Mick’s inner tube as pumping had no effect. Jenny mentioned that the worse thing is to take off your tyre, find inner tube doesn’t fit, then find that you can’t put it back on again as then you are unable to push the bike. That is what happened, as her Shroeder valve wouldn’t fit into his wheel rim. He phoned for a taxi which would take a bike, so the call centre said “It may be some time”. I raced home in top gears, in order to trek back with our car if taxi had still not appeared & Mick all soaked & suffering, but, he was back home first & trying to repair the bike in our garage, as he wanted to cycle to the Albion game on 2.1.12. [I love palindromes.]

It was not the customary sunny sit-outside by the seaside New Year’s Day celebration. Brunch numbers were depleted & colds had taken their toll, but there was still a warm atmosphere at Carat’s & much Clarion cheer. Some were looking even fitter than last year & had fun at Xmas & we all enjoyed being together & back on our bikes. Thanks very much to Ian for organising and leading when he really wasn’t fit to & hope he recovers quicker than Mick did [12 days so far].

Meet by the Palace Pier at 10.15am – or along the route at e.g. Maroccos in Hove. Motoring members welcome.

The traditional route is along the coastal cycle paths, heading west.

I am thinking of taking a different route to Carats. I know this is not very “fellowship is life”, but I am not very keen on the coastal route and would like to find a less direct but hopefully more interesting one. I will probably go from home via Dyke Road Drive,Hove, Aldrington, Hangleton and Portslade Village. Starting quite early, as not sure how long it will take!

If anyone would like to join me, get in touch – preferably via j.r.grozier@btinternet.com, or 07742-963239 – as not many of us live around here it would probably be necessary to meet up en route.

If no takers, I will see you at the cafe. (Cash renewals will be welcome, but do try to bring the right money (£7), in an envelope with your name on it!)