JIM was
In change of the the
Motley group. 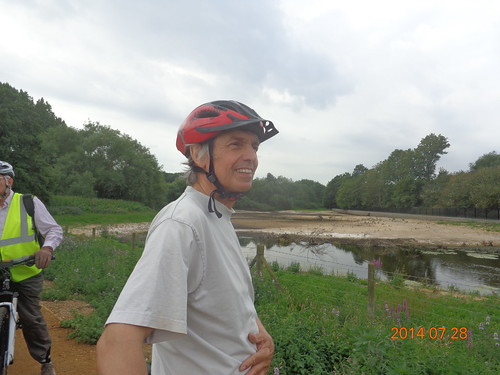 Jim (and half of Julian) at the Moors Nature Reserve

JOYCE struggled personfully to ensure that five bikes would fit into a space for three on the up line
On the return journey she decided that Godstone was the station for her.
Yes, the rest of us were very sorry to lose her from the last leg but she had
Certainly enlivened the lunch-time conversation, as
Ever. (Thanks, Joyce!) 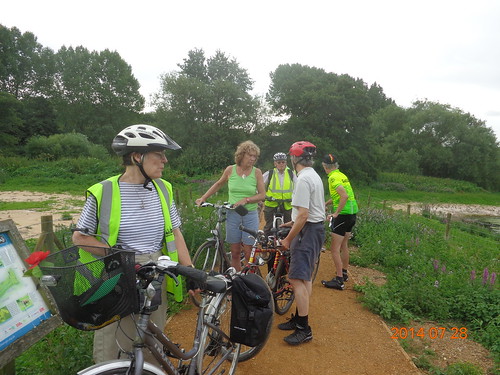 Joyce (left) and others at the Moors Nature Reserve

DAVID’s
Adventures and
Vicissitudes started
In Redhill Station where he involunarily played at going up and
Down the lifts and stairs. (Yes, he caught up with us in the end)

SEAN missed the group at the station having
Exited by the wrong gate.
And, as is his wont, he too was able to catch up with us
Near Cormonger’s Lane. (Cormongers, so it seems, sold offal).

PRUDENCE
Really seemed to enjoy her first outing with Clarion
Undaunted by the ten other
Dotty Clarionettes she met up with and who
Endlessly chattered about this, that and the other.
Notwithstanding her claim to go no further than Waitrose by bike, she proved to be a great new
Clarionette and we hope she will
Enjoy many more rides with the group. (Welcome, Prudence) 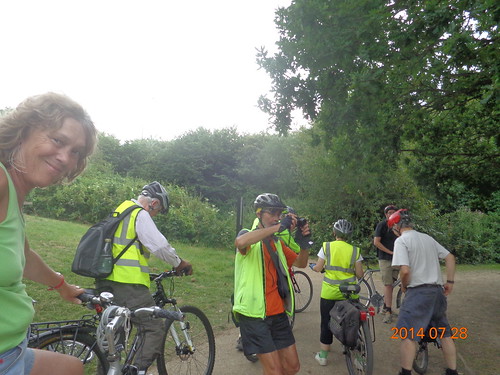 JULIAN’s wheels have
Undergone a transformation. The sleek
Lines of his smart new bike were
Impeccable, the hydraulic brakes
A marvel and
Nevermore will his chain jam as disastrously as on the last ride. (And thanks for all the Bird Info.) 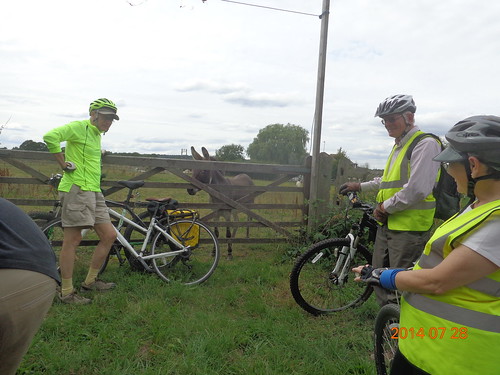 Roger, Suzanne and a donkey all admired Julian’s new bike. Sean, however, appears to be mooning at it.

ANNE, as always, was
Never at a loss to share a kindly word or a sweet, but
No group leader is going to get away with refusing her an
Extended afternoon tea stop (Thank goodness that café was open in Horley). 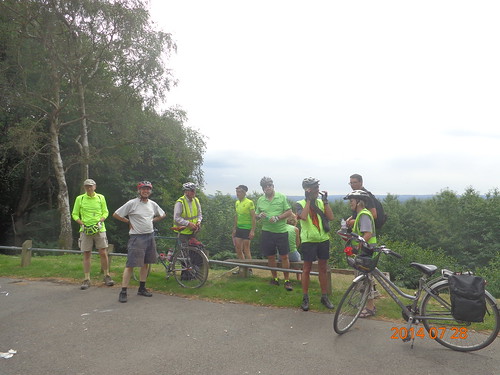 MARTIN (London Clarion) joined the group at Redhill
After having already cycled 25 miles from Tonbridge! Another strong
Rider happy to take a “back seat” and chat about travels and cycling with
Those who could keep up with his expertise.
In Croydon Barn Lane we waited for Jim to return from escorting Joyce to Godstone and then
Next it was time for Martin to wend his 25 miles back to Tonbridge (Let’s hope we meet again soon)

ROGER,
Opted for returning via
Gatwick station rather than Horley to avoid having to change. After the Riverside Garden Park,
Emerging from the lift into the bustling departure terminal of the airport was confusing but Network
Rail have provided not only a new platform, but a new lift, so by 6pm, everyone had got their train.

SUZANNE was daunted by the thought of all those
Undulations (due and undue) but in the end she had
Zip enough (it was not she who accused our great leader of being an “Undulation denier”)
And so managed to keep up. She loved the
New and very pretty route that had been planned for us and
Never once regretted setting off,
Even though getting out of bed had been hard

An Egyptian Goose at the nature reserve

This ride incorporates sections of three previous rides plus a totally new bit. We’ll start off across Nutfield Marsh with its associated lovely nature reserves (where the path is now some 3 inches higher, so we won’t get wet) but – much to the relief of many, no doubt – we will not turn left and ascend the North Downs as before, but will continue south-eastwards, passing through Bletchingley and arriving at our lunch stop, the Griffin in Tandridge Lane.

We then return westwards by a more southerly route, encountering (but skirting round) the ominous cow-infested swamps of Blindley Heath (click here, and scroll down to 14 September, for a report of a previous memorable visit). Then back through Smallfield to pick up NCN21 to Redhill. (Those wanting a shorter ride can return home from Horley station; there may be an even shorter version available by returning from Godstone station).

Start at Redhill station down side (platform 3) exit at 11:00

Getting there: The 10:00 train from Brighton to Victoria and the 10:27 from Victoria to Brighton both stop at Redhill.

Getting back: Trains leave Redhill for Brighton at 58 minutes past the hour and for London at 14, 37 and 49 minutes past.

Instead of having a personal trainer Linda and Angelika had Jim as their personal cycle tour guide. For Linda it was a journey down memory lane, having grown up in Bletchingley.

The three set off from Redhill train station in glorious hot sunshine. They cycled through Spynes Mere Nature Reserve. Spynes is a very old word for “fattening pasture”. That was the time of fattening the cows before WBB Mineral changed it into a sand quarry. Well, now it is a fully restored wildlife area with three lakes.

The reward for pushing the bikes uphill to the Caterham Viewpoint was the magnificent view of the countryside while hearing the muffled sound of the M25 far below. It is a place popular with people having a picnic and lazing around. Well, not for the Cycle Trio. Off they went flying downhill passing only one house.

Along shaded paths and through cool woods they headed towards Woldingham Girls School and its grounds. There was the first surprise for Linda. She recognised the care takers house and remembered a friend living there whose parents had rented the house when she was a child.

Not this house though! This is the main school building.

From there the way to the Cafe in Knights Nursery in Woldingham was a flat smooth ride through a valley with pastures, cows and trees further up. A picture of English idyllic landscape sizzling in the heat of the day.

A pleasant lunch and rest. The recharged batteries were needed for another ascent to Woldingham Village and then down to Godstone …………. not steep ………… but eternal.

Godstone’s old church and surrounding architecture give an other-wordly feel.  One would not be surprised if a door opens and Hansel and Gretel step out. Or Rapunzel would open a window to let her hair down.

Not far is the village green with its Sunday cricket and onlookers. Another idyllic English scene.

The intention was to have tea in the local “The Green Room” where Linda used to work in the restaurant 30 years ago. Unfortunately they were just closing and the trio opted for a cool drink at the pub across the road.

On they cycled through Bletchingley. Jim made sure to take a photo of Linda at the street corner leading to the house where she grew up.

Once again they cycled through the Nature Reserve and stopped to enjoy the view at one of the lakes. Three bathers could be seen in the distance. One was just wading to a little island. Once he stepped onto the island it was a bit of a surprise to see him hiding from his friends view behind a bush squatting down showing us his bare bottom. Not something he had anticipated………..

Then back to Redhill station. Jim and Linda back to Brighton and Angelika to London.

Over the last two years I have led a series of rides featuring cycle route NCN21, which in its entirety runs from Eastbourne to Greenwich, via Polegate, Heathfield, Eridge, East Grinstead, Three Bridges, Gatwick Airport, Redhill, Caterham, Warlingham, Norwood and Lewisham. In the blurb for the final leg on 1 July last year, I confessed that I had “cheated and cut out about 7 miles” of the official route, to avoid a big hill. However this omission niggled me, and I eventually decided that I’d have to plug the gap with a “final final” ride.

This, however, is not that ride. The logistics of incorporating all of the missing bit, from Caterham Viewpoint to Spring Park in Shirley, were just impossible, given the need to get home avoiding too much of suburbia (and definitely East Croydon) while making the ride manageable. So on this ride we’ll do a further 4½ miles of NCN21 only; that means there will eventually have to be a “final final final final” version to include the rest of what I think should really have been described as a 12, not 7, mile gap. (Watch this space!)

This time, then, we’ll repeat the rather nice bit of NCN21 that we did on 15 May 2011, across the newly reclaimed Moors and Spynes Mere Nature Reserves (including the path that is still almost permanently under 3 inches of water – good news is they’re building it up, hope they’ll have finished by then!) and ascend the 80 metres onto the North Downs (walking!) in one fell swoop at an average gradient of 1 in 18. We’ll stop briefly at Caterham Viewpoint to admire the view and get our breath back (but no coffee unless you bring some!) After crossing the A22 (by bridge) we then have a continuous gently-downhill stretch nearly 3 miles long (remember school geography – the Downs have “inward facing scarps”). Much of this goes through the very opulent-looking Woldingham School, who have very kindly allowed the plebs to cycle through their grounds.

We’ll then say goodbye (for now) to NCN21 and have lunch at a garden centre (a Clarion first?) – Knights Nursery at Woldingham, who do light lunches including soup, sandwiches and jacket potatoes, as well as Spitfire bitter. Feel free to pick up some potting compost as well – but remember that you will, unfortunately, have to lug it back up the hill (remember, what goes down must come up!) This will be another 10 minutes of walking (100m ascent; average gradient around 1 in 15). But the good thing about this ride is that there really are only those two hills; the rest is flat to within a good approximation (as we scientists say). So after Woldingham village it’s a big whoosh (on the scarp) down to Godstone where there is a nice tea room on the green. Finally back to Redhill, the last 5 miles being the same as the outgoing route.

Meet at Redhill Station (Platform 3/Down Side exit, Redstone Hill) at 11:00.