The 3 of us paused for a group selfie outside Hassocks Station, wondering if our fellow Clarionisters had been deterred by the showery weather forecast, which proved to be a fine example of fake news, perhaps because we were north of the downs. 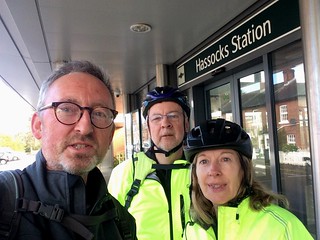 Graham led Nick and me off towards Hurstpierpoint, where a small crowd had gathered at the crossroads outside the church to mark the 100th anniversary of the end of WW1. We paused to observe the 2 minutes silence and hear the traditional bugle rendition of The Last Post before continuing on to Washbrooks Farm for our coffee stop. We were rather impressed by the magnificent pumpkins on display, but completely blown away by the silver sparkly toilet seats, unfairly only available in the women’s toilets. 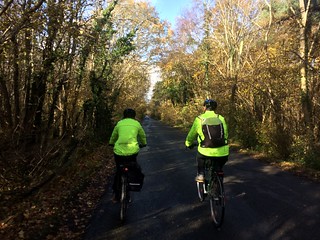 Blue skies and wispy clouds contrasted with the golden autumn foliage and leaf fall as we continued along the B2117 and on to the quieter Shaves Wood Lane, then north towards Twineham. A traffic-free lane led us along the final stretch to our lunch stop at The Sportsman Pub. We were impressed with the quality of our food choices. Graham’s Nut Roast was served with beautifully cooked veg, my chips were served with a complementary side order of Cumberland sauce but Nick surprised us all by going crazy with an order of sweet potato chips, which came with a complementary side of braised carrots and parsnips. In honour of Julian, we perused the extensive dessert menu before returning to our cluster of bikes and heading off on the last leg of our journey. 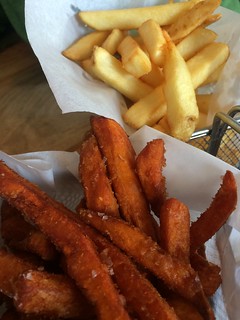 More quiet roads and country lanes took us past Hurstpierpoint College on our return to Hassocks Station, where we waited about 2 minutes for the next train, which was a direct service to Brighton. 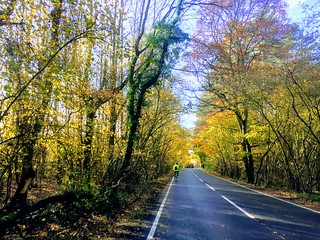 Thanks a lot Graham for leading us on this enjoyable ride, which fortuitously avoided the blustery showers forecasted for Brighton.

Well, we were just a little band of four today as Ian, Julian, Delia and I left Hassocks station on a warmer than usual December morning.  We followed a familiar route out towards Hurstpierpoint where hymns could be heard as we cycled past the church at the crossroads in the village. The congregation was certainly ‘giving it their all’ for us to be able to hear them from the roadway.  Then, on through Albourne towards Twineham through some very pretty lanes where Julian identified the birdsong of a green woodpecker, robins and possibly a song thrush, who were also ‘in good voice’.

At this time of year the winter landscape allows views through the trees that, of course, with trees covered in their summer leaves, you do not see in other seasons.  Between Twineham and Wineham, (what a lovely rhyming couple), we had a view of something unexpected, a massive electricity sub-station which crackled its energy supply along the wires between the concrete supports. Not the prettiest of sights, but at least it is out of view for that part of the year when the trees are in leaf.  Other views through the trees were more pleasing to the eye – the wintry, grey outlines of the Downs and a patchwork of pasture and arable fields.

Always along these routes are some very pretty houses and cottages and also some very large properties which I often find make me wonder what people do for a living to own such large places.  Well, Ian came out with a theory that made us all laugh. He reckoned that many were owned by retired drug dealers who, having evaded the law, wanted a quiet life in the country in their old age!

At Twineham we stopped for lunch at the Royal Oak which, according to the landlord, dates back to the 16th Century and has been a pub for over 200 years. The historic building prompted a conversation about the dangers of travelling by horse drawn coaches back in the day of highwaymen.  Ian, Delia and I have been watching the recent programmes on the tele about smugglers, pirates and highwaymen and the dastardly deeds they got up to. Worth a look on the iplayer if you haven’t managed to see them.

After lunch, (three delicious plates of ploughman’s and one bowl of spiced carrot soup), we began the journey back through Woodmancote towards Albourne and Hurstpierpoint, and we decided not to stop for tea as the light was beginning to fade and Delia was concerned that I do not have any lights on my bike.  So, we got back to Hassocks mid-afternoon in order to make our way home after a very pleasant winter ride and even more pleasant conversation.  Thanks to Ian for organising and leading the ride and may he and all other ‘Clarionistas’  have a very lovely Xmas and I look forward to a New Year of many more rides.

The Next Ride: Sunday 13 December –  Twineham and Wineham

Since our usual end-of-the-year ride – the short circular based on Berwick – is not possible because of lack of train availability, I’ve been thinking about an alternative – short and easy – substitute and this is what I’ve come up with.

We meet at Hassocks station and make for Hurstpierpoint, Albourne and High Cross, taking the Twineham road as far as Twineham Green, then along Bob Lane to Wineham and (an early) lunch at the Royal Oak – always a favourite stop. Back at High Cross on our return leg, we’ll take the road down to Shaves Wood then the B road back to Hurstpierpoint with a possible tea stop at Washbrooks Farm before returning to Hassocks.

Best trains from London would be the 9.36 from Victoria – arrives at 10.37 – or the 8.56 – arrives 10.41 from London Bridge.  It always takes a while for us to get going but if you’re planning to take either of these routes please let me know so we can be sure not to start without you.

Do check your emails at 5 pm the day before – if the weather looks like being grim I will cancel/postpone.

The Next Ride: Sunday 20 October – Shermanbury

We welcome people who want to try one or two of our rides before joining.  If you would like to join the Clarion club, click here to download a membership form.

We first did a ride incorporating the Shermanbury Place bridleway back in 2005 and we’ve done it a couple of times more recently, but not for a  while.. I’ve kept it  as “flat” as possible, made the afternoon session a bit shorter than the pre-lunch one.

We leave Hassocks station and follow the road to Hurstpierpoint where we turn south once over the A23 and follow the old London road down as far as Shaves Wood  where we take the road up to High Cross. The last bit into Shermanbury involves a short stretch of busy main road, then we take the bridleway through Shermanbury, emerge onto a lane near Wineham and make our way to the Royal Oak for lunch.

Then it’s Bobs Lane, Twineham and down to High Cross, then Albourne and retrace our route back to the station.

Off road   Just the bridleway at Shermanbury – shouldn’t be a problem.

Hills:  not many and only little ones

Catering:  lunch at the Royal Oak with possibility of tea at the Hassocks station pub (or a diversion to Washbrooks Farm)