The forecast was fine; the sun was shining; the train ride to the start was simple.  So it was quite a surprise that only five riders assembled at Three Bridges yesterday morning.  Our leaders were Leon and Joyce; the followers were Sikka (Sue), Julian and Roger.  We set off towards Tilgate forest where we paused for a selfie and a look at the mobile phone mast disguised as a tree. 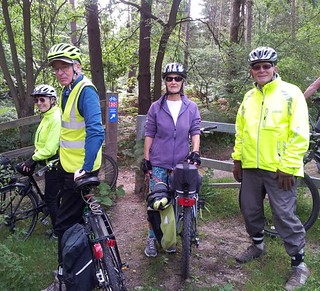 Then on to the long straight downhill run known as Grouse Road.  At one point we stopped to admire the view and Julian pointed out a large, fine looking house, just visible through the trees, to the north.  No one knew what it was and subsequent research has failed to help.  It looks as if it’s on a private road called Woodlands Lane, just south of Colgate village. Any ideas?

At the bottom of Grouse Road we came upon the best view of the ride.  The road swung steeply round a corner and ran across the end of a beautiful stretch of water known as a hammer pond.  These ponds provided the water power for the forges and blast furnaces which made up the iron industry in this part of the Weald until the 18th century.

As we dragged ourselves away from the view we arrived at the “challenging” hill promised in Leon’s write up;  it rose at a gradient of 1 in 8 for a short distance, giving a good excuse to get out of the saddle for a while.

By this time some of us were starting to ask the time honoured question “How far to lunch?” to which Leon provided the only acceptable answer “not far”.  In fact he was right.  A few rather gentler ups and downs brought us into the impeccably manicured village of Warninglid and the welcome sight of the Half Moon Pub.  It was very busy and they were just about to stop taking food orders, but they did take pity on us.  The result was rather a long wait for food, but when it arrived everyone agreed it was worth the wait.

This ride was beautifully planned: quiet winding lanes with sunlight dappling the roadway;  splendid country views  and more downhill riding than up.  And that final cunning trick:  the last five miles or so were almost flat ending at a very reasonably priced café for tea and cake etc. just minutes from the station in Burgess Hill.

Many thanks to Joyce and Leon for planning and leading a delightful Clarion day out.

Anne and I took the early train with Linda who had already cycled from Lancing to Brighton, on arrival we found that Marilyn was also on the train. We had hoped to make a quick visit to the anti-fracking camp before the ride. An acquaintance, who we met at the station by chance had a map. Unfortunately I was looking at it upside down. With Linda in tow I cycled 2 miles north up a rather steep hill. Meanwhile Anne had followed Marilyn to the tea shop and was directed to the camp, so we at least have some photos and a brief token presence. We all arrived back at the station in time to meet the 11.17 train, along with Corinne and her sister Lyn, Sikka/Sue and Julia. Our leader John meanwhile had cycled up from Brighton. The police kindly obliged for the group photo.

We set off with John in the lead. On the principle of devil take the hindmost, Anne consigned me, on pain of unspecified matrimonial sanctions, to be the sweeper up and thereafter chivvied me whenever my front wheel crept past anyone else’s back wheel.

The ride had a certain improvisational feel to it but as John remarked one lane looked much like another. They were, however, very pretty lanes with fine views, albeit bought at the expense of a few substantial undulations. We passed via Staplefield and part of the NCN 20 and hence past Warninglid.

We arrived at the Bolney Stage, originally a famous stop on the Brighton/London road, for a long lunch break. The food was of a high quality and enjoyed by all. The conversation ranged widely and naturally included the fracking issue and energy policy in general.

After lunch we made our way to Hurstpierpoint, although the route taken did not completely coincide with the maps available. Faced with the choice of an early train home from Hassocks or Washbrook Farm for tea and cake, everyone but John, Anne and myself opted to go straight back. We three enjoyed tea, a slice of tiffin for me. and more leisurely and highly enjoyable conversation at the end of which we decided to forsake the train and rode back to Brighton together down the NCN 20.

Thank you John for a very enjoyable ride and congenial company.

Linda, Marilyn, Richard and Tessa travelled together to 3 Bridges sharing tales of organised group bike rides abroad and ones planned for the future.

We met Jim, Leon, Rob and Rob on the platform and set off through the suburbs of Crawley on a cycle track to Furnace Green leading to Tilgate Park. The park had a scary adventure playground weaving through treetops, a golf course and other entertainments.

The bike track continued through woods dappled in sunlight, purple rhododendron petals scattered on the mud due to the recent high winds, though there were plenty to be seen on the bushes too. As there had been rain recently, we voted for the A23 option rather than the muddy track when we came to a fork in the path.

We had a mile or so of A23 to Pease Pottage with a hairy roundabout to negotiate which we did in a group fell swoop before joining Cycle Route 20 to Handcross, a welcome quieter route. We crossed the A23 with a long swoop down Coos Lane to Slaugham Lake where we paused before the inclines that took us to charming Warninglid.

Spronketts Lane led to the A272, another hairy crossing, then straight on to Wineham and the Royal Oak for lunch.

At some point in the morning, a fork in the road separated three of us from the rest of the group. Luckily Jim had a map so we rejoined the rest before straying too far. A resolve was made to wait at junctions and check for the person behind.

After lunch we set off down winding Bob Lane. Creatures with long necks were spotted momentarily through the high hedges, Alpaca? Llama? Ostrich? Not sure.

Job’s Lane was equally delightful and quiet then it was the dreary suburbs of Burgess Hill before reaching the centre. Five of us sat outside Nazar Cafe enjoying an abundance of chocolate and other cake, having been offered among other choices ‘Spotted Richard‘ with ice cream! Service and friendliness were great, Marilyn and Richard were even provided with bananas from the Polish Deli across the road.

Then home on the train, having avoided all rain, with even the wind behind us for the afternoon ride.

Thank you Leon for a splendid day out!

You want to come on this ride? Well, it’s LONG; it’s HILLY; and some of it is on BUSY ROADS. Still want to come? OK, but don’t say you haven’t been warned!

This is the third and last Ouse ride, continuing on from my Lewes-Haywards Heath ride of 20 May, which itself followed on from Seaford-Lewes on 22 January. As it is a themed ride, we can’t be too choosy about the terrain or the length of it. Our patience and/or stamina will be rewarded as we will eventually find the infant Ouse in a channel only a foot wide (though we probably can’t get to the actual source).

We’ll start off with a crossing of the river one bridge upstream from where we left it last time – at Lindfield Bridge. Then to Ardingly for a possible coffee stop, after which a big zig-zag and another bridge (Lower Ryelands Bridge) bring us to the most famous of all the bridges over the Ouse – the Ouse Valley Viaduct with its 11 million bricks. This is a railway bridge of course – the road crosses the river here at the somewhat humbler Upper Ryelands Bridge.

We’ll then continue to Balcombe in order to access Rocks Lane and Rowhill Lane, which is a Big Hill, and I’m afraid it’s the “up” variety. We have whizzed down this hill twice on previous rides, and now it’s payback time. We will walk. At the top we get an impressive view of the viaduct, but a more impressive view awaits us later on.

Then off-road to Staplefield, where we will have lunch at the Victory Inn. At nearby Slaugham we’ll revisit the Ouse, which is now just a few feet across, behind the ruins of Slaugham Place and St Mary’s Church.

Now we have to get into detective mode, as there are conflicting accounts of where the river actually begins. V.M.Taylor’s River Valley Odyssey, which has provided some useful nuggets of information for the previous rides in this series, claims that it originates in “three small waterfalls” on the south side of an old hammer pond north-west of Slaugham. We will find these (one of which I think is what is known as a “fish ladder”) but we will then go on to look at the other candidate, which joins this branch further south. My money’s on this one; just about all the other authorities I have researched say that the Ouse rises “near Lower Beeding” – and they wouldn’t say that if they meant Slaugham, which is just as big; one actually mentions Plummers Plain, a sort of blip on the map which is near to Lower Beeding. It is here that we’ll find the second branch, disappearing across a field in a narrow trench.

Then we’ll speed back to Haywards Heath via Warninglid and Cuckfield, partly reversing the outward route taken on my last Haywards Heath ride, on 11th July 2010, and revisiting the delightful Blunts Wood & Paiges Meadow nature reserve. Before Cuckfield we get a splendid view of the viaduct in the distance, pretty well broadside-on. Tea at Haywards Heath if wanted.

In order to provide a little diversion from the hard graft, I will be distributing copies of my OUSE QUIZ at the start of the ride; judging and prizegiving will be done at lunchtime. To prepare for this, you may wish to consult the descriptions and reports for all three Ouse rides, and any others which seem relevant. (And yes, I realise the report for this one will not exist at the time; but you wouldn’t want it to be TOO easy, would you?)

Start from Haywards Heath station at 10:00.
Length: 26 miles (a shorter version, 11 miles, is available for anyone who wants to get the train home from Balcombe and get their own lunch; alternatively you can join us at Balcombe for a 15 mile ride; let me know if you are planning to do this).
Duration: about 6 hours including coffee and lunch. (Longer with a tea stop)
Terrain: Mainly on hard surfaces. Some off-road. Some hills. Some busy roads: the B2028 (Lindfield-Ardingly) may exercise us a little, but the B2115 (Plummers Plain to Cuckfield) is quieter.
Lunch: Victory Inn at Staplefield
Getting there: Get the 9:14 or 9:34 train from Brighton. Londoners should get the 8:41 from London Bridge or the 9:02 from London Victoria. If joining at Balcombe, catch the 11:00 from Brighton.
Getting home: trains from Haywards Heath to Brighton at 08, 31, 36, 54 minutes past the hour and to London every 10-15 minutes.