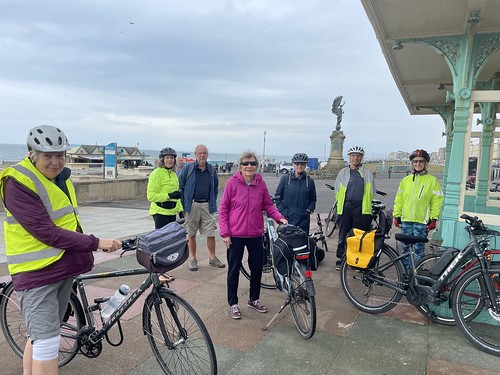 We met at the Peace Statue in Hove, Jim and Nick, Sikka, Angela C and Angela D, Doris, Wendy, Prudence and Graham.

A good turnout for our first ride in a while, so some time was spent catching up with each other and enjoying being in each other’s company.

A quiet ride along the seafront to the Locks at Southwick in light drizzle and under dark clouds – not in the forecast! We waited at the lock gates while a whole flotilla of yachts moved into the large lock that is used by the biggest vessels coming into Shoreham Harbour. Across the locks we made our way to Shoreham Beach and to our first refreshment stop – at the Pollinator Cafe, led by Nick. 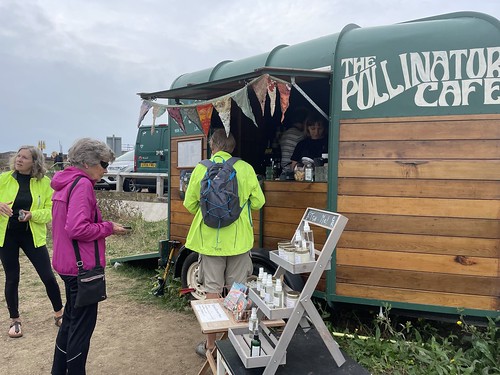 This was the first time ever I was offered a discount for choosing plant based milk – sustainability of course! We were met there by David and his wife Terri with their dog, as David was not cycling today. Quite a reunion after such a long time in lockdown etc.

Jim then took over leadership of the ride with Angela D, Doris and Sikka. Angela C, Wendy, Prudence, Graham and Nick had other priorities and we left them at the cafe. By this time we were ready for lunch and were fortunate to find a table at the Hummingbird Cafe, Shoreham Airport. We had a table overlooking the airfield just as the sun came out offering delightful views of the local countryside and the Downs.

We then cycled to the Old Toll Bridge where Doris left us. Down to four and riding a few miles up Coombe Road to work up an appetite for our next refreshment stop at St Botolph’s Church. 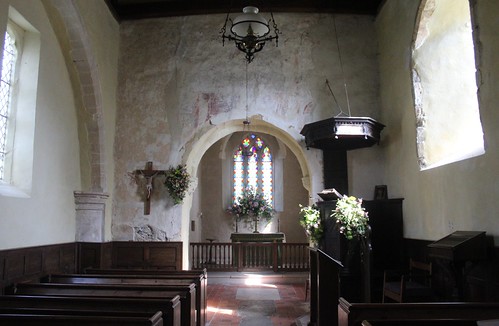 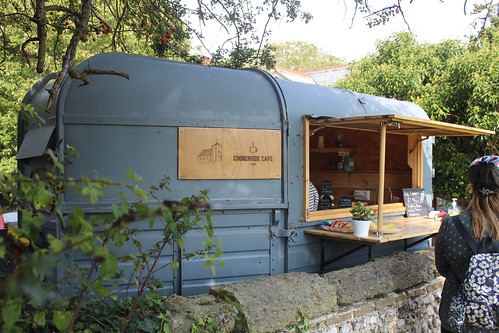 Here we had an enjoyable conversation with a couple who were visiting one of the graves and going on to visit a relative who lived close by. They went off in their car but soon after we encountered them again as we entered Sopers Lane. This was the most challenging part of the ride – up this quiet country lane, through a farmyard and up the concrete track through Steyning Bowl. Very steep and long. 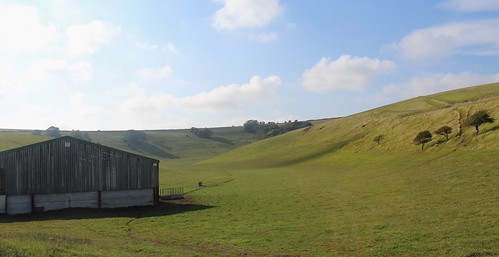 My e-bike came into her own at this point and took me up with ease – so I was able to enjoy a seat at the top – soon to be joined by Jim – and to enjoy the fabulous view over to Truleigh Hill and beyond. Until we were asked to move out of the way so a woman on a horse, leading another horse, asked us to move out of the way. The three of us were then rewarded with a long downhill ride into Sompting, with just one long hill before crossing the A27 and heading for East Worthing. Here Jim left us to visit his daughter and Angela D and I headed for the station where Angela D hoped to catch a train back to Hove.

I continued to the seafront and rode home to Moulsecomb – the last woman standing so to speak.

A lovely and particularly sociable ride – thank you Nick and Jim for planning and leading.

This entry was posted on Monday, October 4th, 2021 at 11:13 pm and is filed under Ride report. You can follow any responses to this entry through the RSS 2.0 feed. You can leave a response, or trackback from your own site.